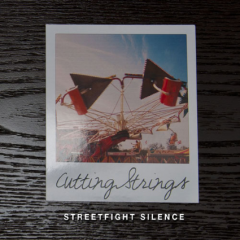 On first listen Streetfight Silence’s debut seems slightly average, not exactly an album to shout about. But in fact this record is one of those that slowly but surely reels you in with the catchiest of choruses and hook laden tracks.

‘Low’, ‘Find Me’ and ‘White Flags’ are textbook pop-punk. Think back to early You Me At Six and Fall Out Boy, back when their music had grittier riffs yet still a strong ear for melody. Streetfight Silence have their own melodic genius in Russ Merry whose vocals are exquisite. Merry hosts a range that even idols Josh Franceschi and Patrick Stump would be proud of.

Surprisingly the stand out track from ‘Cutting Strings‘ is ‘6th November’ which showcases the bands emotional integrity through beautiful acoustic guitar work and heart felt lyrics. A song that will certainly appeal to many a City & Colour fan. ‘Pieces’ closes the album in a dramatic style culminating a successful first record for the young band.

A greater punch in the production department would make ‘Cutting Stings‘ a true force to be reckoned with. Hearing these tracks in a live environment is sure to give them the extra beef they deserve and inspire many a sing-along.