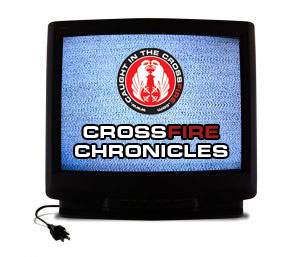 This week the Crossfire Chronicles takes off its nostalgic glasses that were previously fixed on gnarly music videos and french hip-hop and lays its ears down on the pulse of the current UK skate radar. The names we’ve been looking at for this are those that have emerged above the up-and-coming Fresh Blood status but are still incoming. None of these have a pro model out yet but this is something we’re expecting to swiftly change. There’s more to come from all of these guys, much more, but here are five brief written and video introductions to some of the naturally gifted UK heads who have deservedly gained nationwide attention in the last few years. And if each of them keep killing it as hard as they are now, they could very easily win the apparently-golddust-like respect of certain overseas message board lurkers.

Making the decision on what blips on the buzzing radar are the biggest is of course impossible, which is why we’ll be doing a series of these lists. There are just too many heavy hitters in this new British landscape of impossible post-videogame era standards to get a definitive five but this list is a good start. It’s the raddest time to sit and watch the UK scene flourish right now, so pay some attention, buy scene videos and let’s big up where we’re from. Sketchy spots, cups of tea and all day bus passes for life.

Despite my own Essex heritage I get a little unnerved by those who go so far as to get the three swords inked on their bodies. This has less to do with how much I don’t bum Essex (because I do, lots) and more a consequence of the three swords frequently being represented by troupes of ignorant idiots. Ben Raemers on the other hand is none of that sort, he’s a proper skateboarder who can rip on any surface. Not only does he tear concrete a new hole on a skateboard but can take on handrails and street with enough control for the US to wake up and pay attention. éS, Volcom and Enjoi are already fully aware of this.

Ben is far from the grom at Rom days. He is a full-blown Essex ripper, already established as one of the biggest blips on the global skateboarding radar from these shores and will surely only swell up in reputability like a bashed elbow with each transatlantic visit. He can rep the three swords and if I can score some associated gnar points then I might get it too. ‘ave it Essex.

John Tanner has the inherant ability to summon that jazzy street skateboarding spirit that’s rarely let out of its Tincan Folklore timecage. Not only can he roam the streets as fluidly as Carl Shipman as shown in the clip we have chosen to show you (his welcome to éS edit, filmed with the same street spirit by Hold Tight Henry) but he can get 90s tech on ledges and throw a mega nollie heel down the kind of sets that cause your illegally downloaded Adobe Staircounter CS9000 add-on to crash. If you haven’t witnessed his section from HTL North Vs South yet then do yourself a favour and click that link. Expect more as he flows out of London and takes his bag of perfected tricks around the globe with the help of some wood from Cliché.

How many people can you name that have done a line on the Great Wall of China?

When I was living in Essex I had the pleasure of being around skaters like Ben Raemers who we’ve already discussed a couple of paragraphs ago, as well as many other similarly get-some gnarbringer sorts, with the exception of smooth operator Gorgeous Dave who brings a whole other platter of rad to the packed table.

Living in Wales offered a totally different approach to skating. Sure, you had the likes of Jess Young and Nick Jones getting their honourary three swords on, but it was the quiet and inconspicuous shredders like Chris Jones that really made your head explode. Things that good just shouldn’t be done so nonchalantly. Chris is an enormous pleasure to watch in the same way that listening to Boards of Canada while on a comedown sounds amazing. Simultaneously calm and epic, whilst overflowing with substance. He killed it for the swoosh at the Nike Demo in London during the summer, and more recently on Crayon’s Wheelscape tour but if you’re not up to date then have a look at last year’s Christmas offcuts from Crayon Skateboards to see what I mean.

Dirrrrrrrrrrty Dublin stand up! One of the post-LAF fresh bloods who seemingly came out of no where with an extraordinary talent, Keith Walsh is one of the mega Irish powerhouses. Cian Eades and Gav Coughlan could easily have made this list but whether it was the mega helipops that swayed me or the handrail stomping over the other side of the pond I’m not sure, but Keith Walsh is one to watch on that increasingly busy radar. A long-term stand out on the UK DC team and now one of Unabomber’s gnarliest assets, and that’s saying something…

Even though Etnies play him down as a carpenter with fat fingers, Barney Page is the kind of skater that has an already natural talent that will only just keep getting better. Disgusting isn’t it? Good thing any jealousy or envy that you may suffer watching Barney skate is instantly overshadowed by how massively stoked his skating makes you feel, not to mention how much of a bloody nice gent he is too. I wish nothing but good things for his future, but he’s destined to go supernova on the radar sooner than you’d think regardless of my good wishes. If you’re still sleeping on him then you better wake up because when he fully blows up worldwide I’m afraid that you’re going to get severely burnt. Watch his section from the Motive Skateboard’s incredible Dimensions and see why…