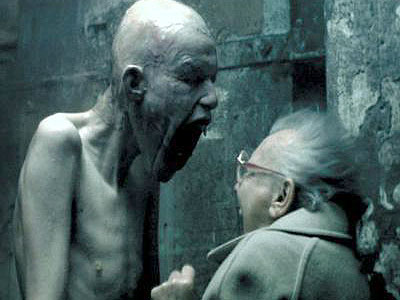 Hey! Do you remember a time when MTV played music videos?  I’ll forgive you if you don’t because after adapting my brain to this ridiculous contraption we call the internet I too am shafted if I’m to recall or even comprehend how anything ever got done before it. Today, Crossfire Chronicles takes you on a time machine to a time when people actually paid attention to things so gather round kids because this is a true story.

Once upon a time a channel called MTV existed solely to make music more interesting. Every so often they got this right and songs that were previously unlistenable became awesome because we could see things like Peter Gabriel getting assaulted by a fruit salad before being replaced by two frozen chickens who know how to get down. Yet despite its enormous potential, MTV had one significant problem in that it frequently banned anything remotely interesting because pissy parents were always on the blower complaining instead of raising their kids to appreciate a good music video instead of well… doing this. Eventually this got out of control and MTV decided to stop playing music videos altogether and replace them with more family-friendly television series such as Jersey Shore, 16 And Pregant and Tila Fucking Tequila.

So for your enjoyment we have harnessed the power of the censorship-dodging internet to show you our picks for the five gnarliest music videos we can find. Most of these are massively unsafe for watching during work but if you didn’t figure that out already then maybe MTV banned these for good reason. Enjoy.

When Trent Raznor started to unscrew the artistic shackles placed on him by TVT Records, the methods in which he started playing with his new found freedom can be compared to the way a cat would play with a mouse, providing the cat was wearing a gimp mask and going at the mouse with razorblades and hammers. The video for ‘Happiness In Slavery’ was unsurprisingly banned basically everywhere on the planet for that very reason. Directed by Jon Reiss, we are presented with performance artist and part-time cystic fibrosis ignorer Bob Flanagan tortured by machines in stark black and white. We’re going in at the deep end here. Boys, hold on to your bollocks.

The videoclip that accompanies this excellent song that pissed off a whole host of people before it even had a music video accomplished three incredible things. Firstly, it managed to piss off even more people than the unambiguously titled song did in the first place. Secondly, its controversial status helped the single chart in more or less every country that had banned the video from being shown. Thirdly, it led to M. Night Shyamalan spending his entire career trying (and failing) to recreate that moment when the camera looks in the mirror and everyone watching clocks that the person we’ve just watched smacking bitches up in the video is actually a bitch too. Directed by Jonas Åkerlund, this video had the plot twist nailed.

Picking what Chris Cunningham video we wanted in here was a painful process. Not only did we have to decide what one of Chris’ consistently gnarly and even more consistently brilliant videos was to go in this article, but we actually had to sit and watch them all and now I’m physically unable to close my eyes. Though I was tempted to go with Windowlicker for its perpetually relevant poke at mainstream musician’s ego-centric methods of presentation, or Rubber Johnny’s celebration of distorted bodies and mindfuck editing, it became swiftly apparent that the obvious choice was the best choice. I mean, is there anything gnarlier or creepier than a bunch of Richard D. James clones running around the set of Clockwork Orange shouting at grannies? Answers on a postcard addressed to someone other than me thanks.

Romain Gavras’ most recent short film (that doubled as the music video M.I.A’s ‘Born Free’) managed to get banned from Youtube in the US. We’ve all been on Youtube before and we therefore know that this is more or less impossible. For example, this little shit has yet to be banned and I would like to know who at Youtube isn’t reading my letters of complaint. The problem with putting that on this list instead of his at-once alarming, exciting and gnarly video for Justice’s ‘Stress’, is that it had somewhat of a more obvious political point. The video for ‘Stress’ on the other hand basically showed a bunch of kids running riot La Haine style (sans-any-political-agenda-what-so-ever) and fucking shit up. That’s it. It’s great.

The video for ‘Corporate Occult’, a song (by some loose definition) by Finland’s electronic brick shithouse Huoratron, is as gnarly as the reportedly haunted forest of facial hair that’s rooted on the man’s face. Directed by Cédric Blaisbois, the video unashamedly borrows techniques from Chris Cunningham, Oren Peli and Alien’s ‘Chestburster’ scene to completely re-imagine the abbreviation ‘NSFW’. The video has been billed as blatant hardcore pornography and the music has been labelled as both intense and brutally painful. It’s most definitely gnarly and unquestionably not fucking safe for work. Or home. Or anywhere else.