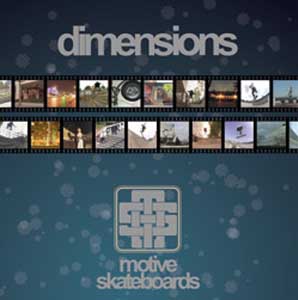 Dimensions is the first full-length DVD production from Motive Skateboards. Much to my delight, Motive have embraced the internet as a less-profitable but more effective method of distribution and have shoved the entire thing online so anyone can see each section at the cost of some pixels here and there. Furthermore, Motive love us so much the disc came free on the cover of Sidewalk in October which is already more than deserving of your sterling. But my doovde player is broken and every time I ring Currys for a new doovde player they tell me to stop making shitty popular culture references, especially ones that aren’t even popular anymore.

Ciaran O’ Connor on the other hand, the ever-efficient editing mastermind (you may have heard of him from such films as ‘Savoir Faire’ or The Harmony’s ‘Wolfstadt’) in charge of making all this street surfing nonsense make sense to us, appears to have everything in working order. Dimensions opens stylishly and has enough aesthetic joy to distract the onset of what I like to call ‘skateboarding-headway-induced-todger-envy’ or SHITE for short. SHITE is the unsettling depression and anxiety that occurs after watching a progressive, gnarly, baller skate video, remembering that you can’t skate for peanuts and subsequently developing a slight disdain for those in the flick for being so goddamn talented. Now, everyone on Motive kills it, so if it wasn’t for Ciaran’s magic touch I wouldn’t be praising the video for another demonstration of how the UK skate scene is constantly upping its game, but probably calling the entire team arseholes.

Let’s get stuck in, Jack Edwards kicks things off with uninterrupted ledge combos without lingering too long in the protective block sanctuary of Milton Keynes’ bus station. Instead he breaks out into less-conquered territory and smashes it with a pace that doesn’t once decelerate. His closing moves on some of the finest pieces of marble Luxembourg have to offer aren’t messing about.

Paul Carter is next and initiates the onslaught of some of Bristol’s most well-known spots; in his short, but satisfying section (reminiscent of 90s videos that didn’t require 14 minute MJ epics) there’s a front blunt that will force you to breathe manually for a while and a nollie 360 over the wall at Little Lloyds that can only be described as majestic. Layth Sami furthers the shutting-down of Bristol with a monster switch 360 flip at that 9 stair near the station and a switch flip nosegrind on that ledge-to-bank-spot that looks wonderful but is notoriously horrible to skate. Leo Smith closes things off with quality over quantity again, styling up Spain and catching flips like people naturally shouldn’t be able to do.

Dylan Hughes keeps Wales’ reputation for skater’s killing it on the inconspicuous tip with this solid section littered with variety and ledge combos that stay well above the standard of those who missed their stop off the bandwagon. The frontboard spinner to noseblunt on those Malaga-esque blocks a short drive away from Cardiff in a town you probably wouldn’t be able to pronounce is a prime example. The huge combo move at Bercy can’t go amiss either; switch inward heel to hug Lizard King. So courageous.

If you’ve read this far and still haven’t watched the DVD yet then either you must have some serious time on your hands or you’re one of those stubborn ‘I absolutely must try before I buy’ types. Which is fine, but if you’re still reading this and aren’t familiar with Barney Page yet then stop reading and sort your bloody life out. There are few if any words to describe how impressive Barney is on a skateboard, and if there are any they’ll be in the rich semantic field of ‘awesome’. Barney is one of the finest skaters to evoke my penis-envy, and the first red head to do so. Apart from maybe Dickfingers. But then Dickfingers hasn’t ollied over the rail into that steep-as-shit brick bank in Bristol.

Dave Snaddon has been consistently killing it in every section I’ve seen him put out into the ether. The slightly-hunched style, lengthy lines riddled with monster pop and precision landings have often caused me to draw similarities with Brian Wenning, only Snaddon has a better trick selection and isn’t a bit of a silly bugger. He had one of my favourite sections in the incredible Savoir Faire and has my personal favourite section in this. Progression without batting an eyelid. Sean Smith is straight up fucking bananas. That’s all I’m saying; a section worthy of closing another UK banger.

Get on it at www.motiveskateboards.co.uk and click here for a full interview with Dave Snaddon about this production.