The Impericon Never Say Die Tour (INSD) has been tearing its way across Europe since 2007. The mini-touring festival -comparable to Vans Warped Tour- showcases exciting upcoming and established acts in the world of Metalcore, Metal, Hardcore, Punk and Deathcore with previous bands on the bill including Emmure, Architects, Suicide Silence, Bleeding Through and Parkway Drive.

2012 sees the tour feature an all-American line up with headliners We Came As Romans joined by blessthefall, Stick To Your Guns, For The Fallen Dreams, Obey The Brave, At The Skylines, The Browning and At Dawn We Rage. The tour stops off at 20 dates across Europe including 3 in the UK.

On 18th October the 8 band bill tore apart Camden’s Electric Ballroom with headliners We Came As Romans showing how dynamic the genre of metalcore can be. However it was reported that Obey The Brave (who took our ‘Album of the Week’ spot with ‘Young Blood‘ back in early August) stole the show. As ever Stick To Your Guns impressed with their uplifting brand of hardcore whilst blessthefall and For The Fallen Dreams were widely appreciated due to impressive performances from their charismatic front men. We sent talented photographer Jake Owens to capture the annual jaunt through his lens, here are his results… 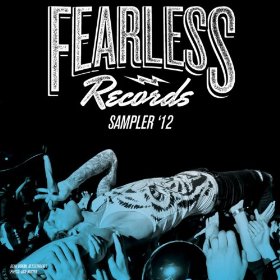 Fearless Records are currently giving away their 2012 sampler through Amazon, for FREE! It features Crossfire favorites Pierce The Veil as well as 10 more Fearless Record artists ranging from the poppiest of pop-punk bands Go Radio to the obscurely dressed modern-metalcore heroes Motionless In White!

Below is the track-listing: