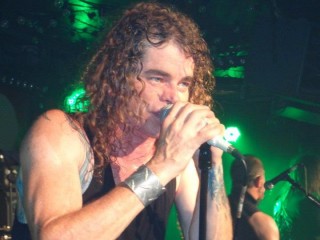 Tonight’s odd ‘metal’ bill is part of Converse’s ‘Represent’ series of gigs at the legendary birthplace of punk, the 100 Club which it saved from closure last year. The venue is hotter than Satan’s armpit and a misty haze of perspiration hangs in the air as the Skill Wizzard DJ’s drop some of the finest metallic tuneage to wash away the sour taste of the indie rock bands that have preceded them. The throng gathers around the elongated 100 Club in anticipation of the headlining appearance of veteran power thrashers Overkill. When they take to the stage the volume is so earth shatteringly loud it could dislodge fillings and is riddled with painful distortion.

It takes a couple of songs for the quintet to hit their stride and for the sound to level out but by the time ‘Wrecking Crew’ tears past they are an unstoppable powerhouse.

Playing in the confines of a sixty minute slot tonight they crank through a greatest hits set from the rousing sing-a-long of ‘Hello From The Gutter’ to the anthemic stomp of ‘In Union We Stand’ and ‘Elimination’. Vocalist Bobby ‘Blitz’ Ellsworth’s sinewy frame contorts like a sort of metal Iggy Pop as he bellows forth his trademark baritone howl then darts stage right during instrumental breaks and gasps on oxygen in the oppressive humidity.

Overkill climax with their cover of Subhumans ‘Fuck You!’ as the crowd’s last drop of energy is rinsed from them, shouting profanity with their middle fingers held aloft. As they rumble to a close Ellsworth has a shit eating grin and is drenched in sweat. Despite Overkill being over thirty years old they ably prove they can still hammer it hard and it’s a testament to their longevity that a venue as small as this simply cannot contain them, awesome. 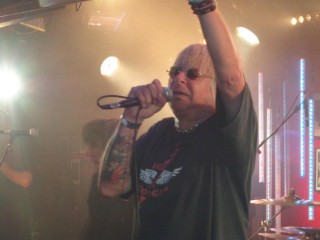 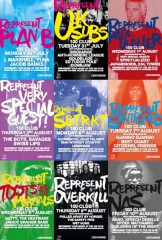