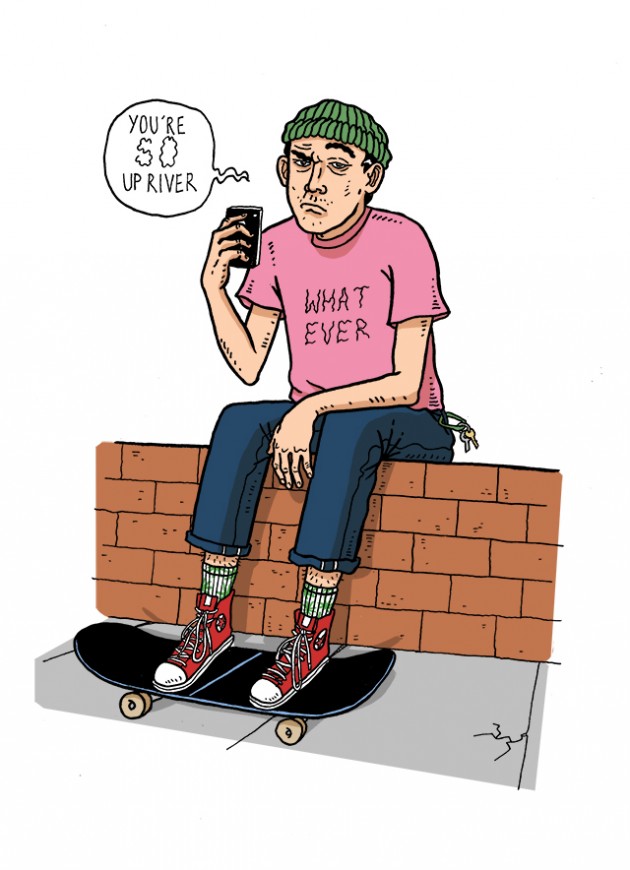 It’s a great time to be a skateboarder. Whether you’re a teenager rocking high-waters, retro board shapes and no-complies, or a 30-plus Wu-tang and switch-mongo advocate, the indie brands have something for you. At the exact same time, identikit athletes perform for energy drink sponsors and a global audience. At the grass-roots, these contradictions feed and are fed by an ‘anything goes’ attitude that had been absent since the victory of street skating in the culture wars of the early 90s. Skating has become more at ease with difference, from trick selection to age and gender. Or so it may seem to those of us who immerse ourselves in this stuff out of weird compulsion.

But increased popularity has attracted unwanted attention from the mainstream media. The Guardian recently recommended Supreme 5-panels and Palace t-shirts to metropolitan creatives struggling with what to wear at the weekend. Whilst appropriating our style they sneer at the act of skateboarding: along with the New York Times, the BBC and Marie Claire, they can’t help but flap and point at the ‘new’ phenomena of the over-30 male skateboarder and female skaters of any age whatsoever. Marie Claire got themselves rightfully slapped down for suggesting that girls should only be interested in skating to pick up cute boys, but it’s the Telegraph who have been particularly generous. Not satisfied with paying an ex-FHM writer to tell us to quit in our teens, they tasked Harry Wallop, self-styled consumer expert and grandson of the Earl of Portsmouth, to cry ‘mid-life crisis’ at those who refuse to cease skating after an arbitrary age milestone. Because skateboarding is for teenage boys – and what’s funnier than some 35, 40 or 50 year-old who’s too poor for a sports car?

As aristocratic journos and media arseholes seek to define us as either desperate mid-lifers or ignorant teenagers, respected market researcher YouGov comes to the rescue. They promise to give their clients a “detailed portrait of their customers’ entire lives….allowing brands and their agencies to assess consumer behaviour with greater granularity, accuracy, and immediacy than ever before.” And luckily for us, they have a profile for ‘people who do skateboarding’. YouGov’s skateboarder is male, aged between 18-24, in low-skilled work or unemployed, and has a disposable income of less than £125 a month. Unfortunately, he also says some pretty dumb things. His favourite brands and entertainment include Skittles sweets and Glorious Goodwood Horse racing….Thanks YouGov, you’ve just provided empirical evidence to support Wallop et al.’s view that skateboarding is overwhelmingly for ill-informed nose-pickers who’ll buy anything gaudy or colourful. 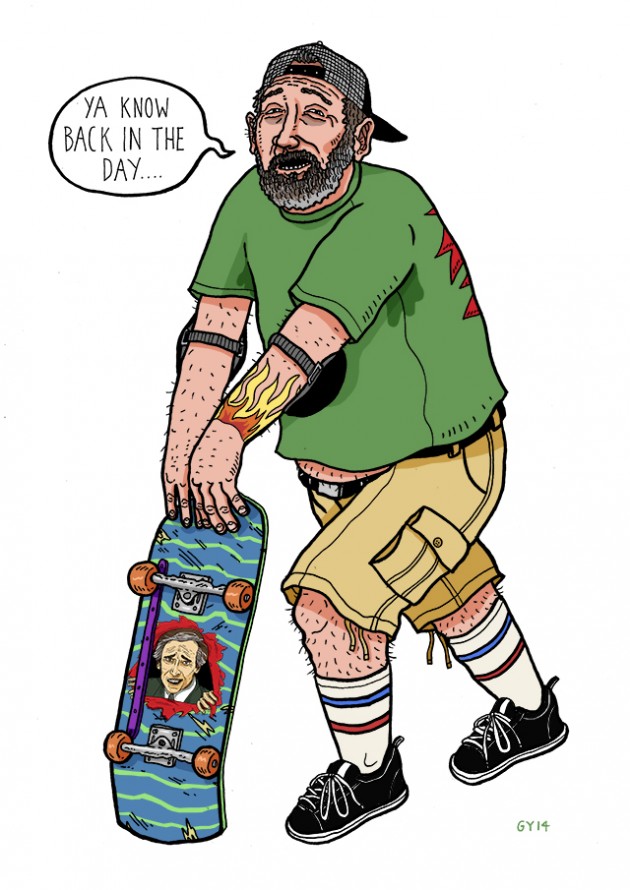 Of course, there are big caveats. For every ‘real’ skateboarder who make up their relatively small sample, you’ll undoubtedly have at least three berks who list skating amongst a menu of random ‘extreme dude’ activities. You know the guy: he frequently pops up on TV dating shows (“Hi, my name’s Tristan – I’m into Coldplay, extreme sports – like skateboarding and bungee jumping – I live with my mum and have a pierced buttock”). Secondly, the brand and entertainment choices are likely to be selected from YouGov’s clients. Welcome or Magenta are unlikely to be amongst the options. But with all those caveats said and done, this profile does have elements of truth.

Young males do make up a very large part of skateboarding. Skate industry reps will tell you that ‘kids’ make up their target market. The briefest visit to a skatepark shows this to be true. The bravest, most thought-provoking Jenkem articles are inevitably followed by comments from 15 year old Americans slurring the author’s and each others’ sexual preferences.

Salty older skaters may protest, “no way, brah…. we’re the 21st century’s travelling warrior poets: modern-day beatniks, like Kerouac in vulcanised sneakers.” But there’s a good reason our video and graphic output remains streets ahead of other contemporary sub-cultures (even during the dark years of the mid-2000s when brands churned out nothing but logo boards and every video was edited to cry-baby indie-rock). Energetic, wilful stupidity. However much of a well-travelled, bohemian Zen warrior you may like to think you are, however eclectic your music taste, or how many art galleries you’ve visited, if you skate – you’re 70% idiotic teenager ‘til the day you die. And this is a great thing. Take Jacob Ovgren’s amazing art for Polar, or World Industries in the mid-90s – when our culture is at its best, it’s mainlining pure youthful stupidity alongside the obligatory time lapse photography and Smiths lyrics.

Of course, the average age of skateboarders is getting older. No real skater quits any more, unless they’ve been super unlucky with injury. Our challenge is to move beyond the persistent level of sexism and homophobia – to mature a tiny little bit without losing sight of what it means to be a skate rat. 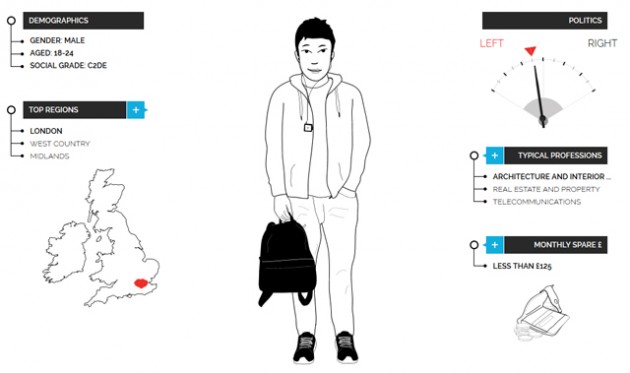 The other message from YouGov’s profile is the accessibility of skateboarding to lower income groups. You don’t need to afford skiing trips or golf club membership to be a committed skateboarder. The appeal to people from deprived backgrounds as well as more comfortable suburban families drives skateboarding’s sense of creativity and grittiness. Very little good music is created by the posh – there needs to be some struggle, some risk. For less than £200 you can skate exactly the same set-up and sneakers as Eric Koston. However elitist and judgemental skating can sometimes be, it is ultimately democratic.

And this gets us full circle. Why do ‘they’ have such a dim view of the act of skateboarding? Your average middle-class adult can go on a snowboarding holiday, and no one bats an eyelid. Terrible people join golf clubs, and impress other terrible people by doing so. No criticism of these things, but they cost money. You can lose a lot of precious life worrying about why the arseholes judge skateboarding the way they do – but the opinion and lifestyle pages of the Telegraph, Times, Independent, Guardian etc. also tend to say some pretty terrible things about other pastimes with relatively low financial barriers to entry. Cycling? Also full of desperate mid-lifers who can’t afford an affair. Running? Sad try hards who need to get out more. Music fan over 25? You’re a “Dave” who should visit Dignitas.

In short, if you’re an adult, and do any of these things: the UK commentariat hates you. So don’t worry about it: skateboarding’s amazing, and free, and sketchy, and grubby. If you did something else, the arseholes will still call you terrible things. And this is why: from William the Conqueror to David Cameron, the rich have always played – be it fox hunting or croquet. Only in relatively recent years have normal folk been able to devote significant time to leisure activities. Just 40 years’ ago, many in the north and midlands traded their school uniform for a hard hat and a lifetime of back-breaking coal mining. The modern Western world, with all its ills and inequalities, gives most of us the opportunity to play.

In addition to saying bitter things about skateboarding, Harry Wallop wrote ‘Consumed: How Shopping Fed the Class System’, in which he argues that it is spending that gives us our social status. In his world, we are defined by what we consume. If we buy similar products and play at similarly expensive games, we have ascended to their social level. If we spend our money on a skateboard, or a pair of running shoes, or a bike, we’re a scumbag – we’ve brought nothing of value, and thus have no value. And when you realise that an enormous share of newspaper columnists and other ‘opinion formers’ belong to a tiny elite (47% went to Oxford or Cambridge compared to less than 1% of the population, according to the Cabinet Office’s ‘Elitist Britain’ study), its not surprising they can’t see anything positive in skateboarding – it merrily spits in the face of the values of their elite.

So whether you’re 15 or 45, if you skate, you’re a stupid genius, sticking two fingers up at our social ‘betters’. They can keep Harry Wallop and YouGov, we’ve got Kareem Campbell, Chewy Cannon and Dave Mackey.