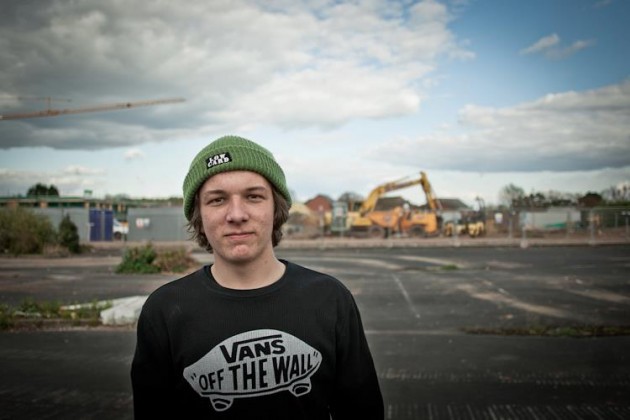 The Black Country’s most notorious crew; Gnargore released their latest scene video ‘Kickflip and Friends‘ this month, so to commemorate this massive moment in skateboarding history James Brewer sat down with A Third Foot flo-rida (boots with the fur?) Ryan Price who has been going hard in the proverbial paint for this latest visual offering.

Ryan’s a humble lad, always really grateful for any praise he gets, but once you get to know him he is a classic pisstaker and can spend a full day picking his target and trying to break them down. He hasn’t always been like this. When I first met him at a comp at Worcester’s Perdiswell skatepark, I saw a kid who was silent and about 5ft 4″ with massive, curly hair doing early grabs. Unlike most kids though he was set up with an 8″ Creature board and Indy’s which was a refreshing change from the Wet Willy/Grind King combo I had become so used to seeing. Watching him skate impressed me for a kid of his age, carving round the bowl. It was great to see. Since that day he hasn’t stopped impressing me, and in 2011 he was finally noticed by some of his peers and the flow started.

I called Ryan up a week before the Gnargore premiere while he was on a trip in Bristol and decided to bombard him with questions to see how he’d react (he’s not so good in these situations). So here it is the result of talking to a sometimes socially awkward, yet brilliantly talented Ryan Price.

I’m good thanks. I’ve just been skating loads out and about in Bristol, skating some streets and a mini ramp.

So before we get too ahead of ourselves, give me the standard issue intro.

My name’s Ryan Price, I’m 18, I’m from Stourport in Worcestershire and I ride for A Third Foot.

For a kid from a relatively unknown town that is predominantly known locally for being a bit of a ‘fairground town’ how did you even start skateboarding?

Erm, I’m not sure. There was a mini ramp down the road from my house, so I had a go and stuck to it. I looked up to Luke Kindon who was a few years older than me in my town. These days we’re good mates and now we both ride for A Third Foot, it’s rad!

Stourport’s got a bit of a reputation as a pikey town, sometimes we like to wind you up and say we can see the pikey coming out in you. Have you ever had any trouble with the gypsies?

I never had much trouble as I grew up with them, scraps here and there though. Once I was outside the chippy, this gypsy grabbed me round the neck and I dropped my chips. So he felt bad, gave me a pound to get some more. I got some, then he wanted his money back! Haha! That’s about the worst of it though, it’s not so bad.

Every wall is there for the ride. Photo by Tim Borrow. 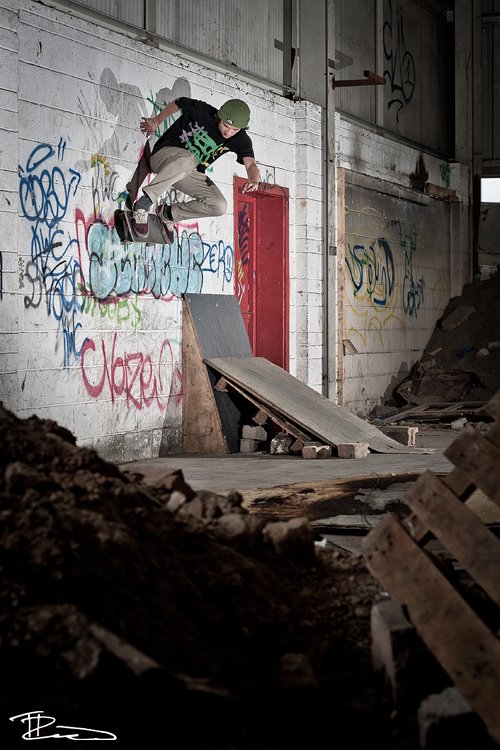 When you first started out you seemed to totally skip the ‘grom’ stage and just went straight at it will 8″+ boards and a need for speed instead of ledge dancing. What inspired you to be like that?

The first video I saw was the Creature video that was double disk; Born Dead and Black Metal that came with Sidewalk. So I always just skated ramp. Skating fast is something that never scares me, it’s easier to bail out at speed. Going slow is way scarier. When I skate street going fast is easier. Like when your going fast you can just fly out of it and not hurt yourself.

Not long after there was a Facebook petition for you to be ‘on Gnargore’?

Yeah I was real stoked on that. That was Joel who was on Gnargore set that up, and it was amazing. So after that I started going out filming with them and after that filmed a part for Wizard Council.

For those who don’t know (how dare you!) what is Gnargore?

It’s a bunch of mates who skate and make videos. I love it. It means a lot to me – skating with my best mates and having a laugh.

What’s your favourite memory of being a member of Gnargore.

Making Denning sour. Just ripping it into him. About how/when we get to a spot he sits in his car, turns his heaters on and smokes weed instead of skating. Haha! It’s just banter though, all a good laugh! Haha!

You had the opening section in the last Gnargore video ‘Wizard Council’ was that you first part?

Yeah that was my first part. It was fun. I didn’t really have an idea of how I wanted it to look, I just filmed anything and everything. Dan Jordan pretty much choreographed my section, down to the point I’ve even got clips with his leather jacket and bandana on! 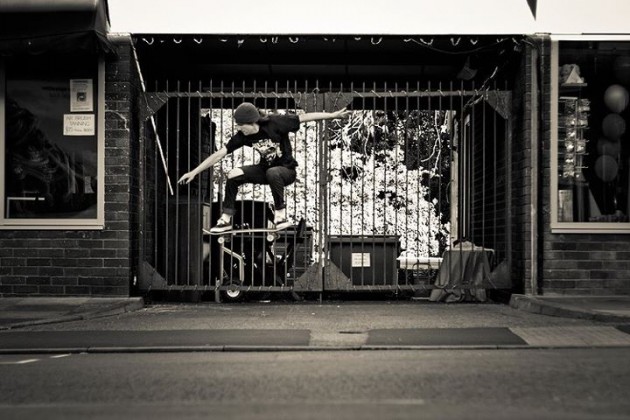 How has filming been for the latest video Kickflip and Friends? From a slight insider view I think there has been a bit more pressure as everyone wanted to step up a gear.

It’s been similar to the last one. I’m more stoked on my footage for this part though. We just head out every Sunday and listen to Dan Jordan moan until we do something and even then he’ll say it’s shit. It’s fun!

Midway through filming you got on A Third Foot, how did that happen?

Erm, it was mainly from Luke Kindon, Tom Gillespie and Dan Jordan filming me and taking it in to show Ken. I used to go in and buy boards direct, then one day I went in to get one and Ken said they were gonna start flowing me boards. I was so stoked. I went skating straight after and then off to the pub to celebrate. 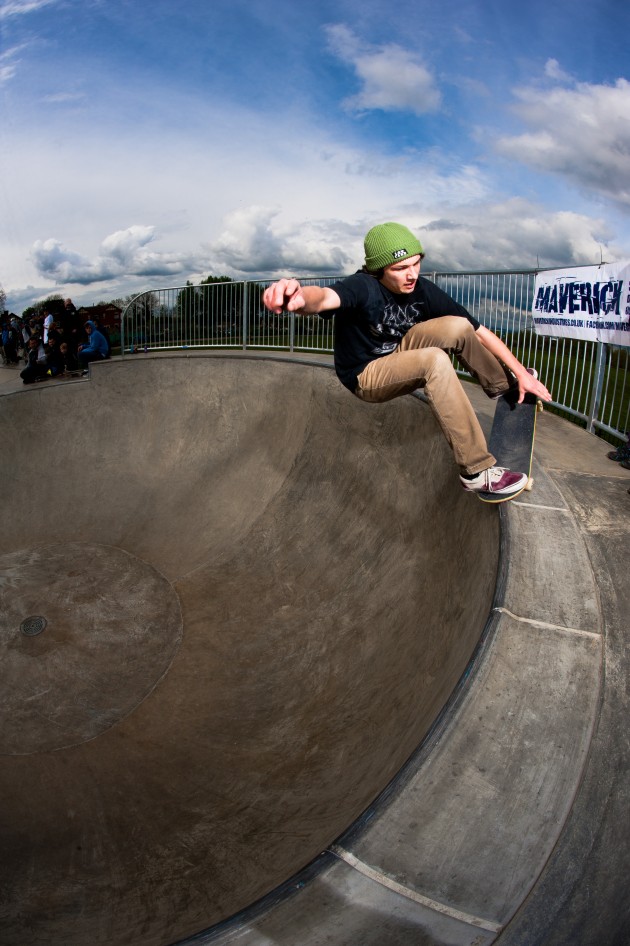 I heard a story not so long ago about you punching a pigeon mid flight? Care to discuss that at all?

I went to the Churchdown comp and won £75, but Tom Carr had drove me and broke his foot so he couldn’t take me back. So I just went to Bristol and hung out with those guys and celebrated. The night was nuts. We ended up at some club, we were all drunk and rowdy, some bloke tried to start a fight with us all of us for no real reason, then we were heading back and decided to drop sand bags and rocks on an empty tramps tent from a bridge. When we got back into Andy’s flat, we were in the hallway and this pigeon was flying around. We were chasing it and as it flew towards me, I just punched the air and it happened to clock him out, stone cold on the floor. I was really sad. I didn’t wanna kill it. I like animals so it was pure coincidence.

So what’s next for Ryan Price? Is there anyone out there you want to thank?

I dunno, I’m just gonna keep skateboarding. Once the Gnargore part is out there’s talk of an A Third Foot video, so i’ll film a part for that. Big thanks to Gnargore, A Third Foot, Luke Kindon, Tom Carr, NOT DAN JORDAN, Ideal Skateshop, Parslow, Tribe Night Club, that’s it I think.

Gnargore’s brand new DVD ‘Kickflip and Friends‘ is out now and available to pick up for £5 from gnargore.bigcartel.com Watch Ryan’s full section from it here and pick one up.

To embed this video on Facebook, copy and paste this link: http://bcove.me/jrndmuoc