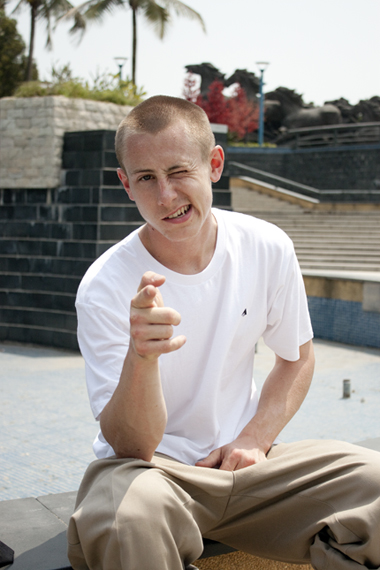 2010 was a cracking year for Brandon Westgate. Not only did his official pro status on Zoo York come to fruition, his part in Emerica’s most anticipated DVD Stay Gold kicked off smiles for miles as his technically gifted style stomped through the streets of SF and beyond.

His pro shoe on Emerica released last month brought another edit that swept the web and kept his skating do the talking so we decided to share a few of our own words with the Massachusetts kid that keeps himself one step ahead of the game by wielding some seriously devestating pop.

Nothing much just got back from my shoe party in LA.

New Year’s Eve wasn’t too long ago, do you remember it?

It wasn’t messy, my girlfriend and I went to her sister’s and she had this karaoke machine set up and everyone got drunk and sung songs all night, it was fun.

Turns out you’re a month younger than me. That’s bonkers. I haven’t even bombed a hill in SF yet? How did that feel the first time you did it?

It was the best feeling and every time it gets better, you really have to get out there one time.

Compared with many other skaters in recent years, very little is known about your personality and life off the board. Was it a conscious decision to not let the world’s collide and let your skating do any necessary talking or are you just being you?

I guess I’m just being me. I like being out here and Massachusetts, away from everything.

Even a recent interview with Chris Nieratko didn’t disclose too much about you. So let’s just talk straight skateboarding for the rest of the interview: last time we interviewed you was in 2006, has skating changed for you at all during those four years or is it still the raddest thing ever?

It’s for sure still the raddest thing ever, I’ve learned how to skate different and learned new tricks I never would have thought about then. Thats the best thing about skateboarding you can learn whatever you want.

Over the last few years who has helped you out or inspired you to get you where you are right now?

There’s a lot of people who inspired me and helped me out: Jeff, Timothy, Miner, Seamus, Suski, Leo, Shetler, Herman, Reynolds, Figgy…

Your shoe has just arrived and everyone is mad stoked on it. Looks a little similar to the Hsu model (very good thing). Was the design inspired by that model at all?

I always really liked the Jerry’s so I started off that, but I just tried to make a really comfortable skate shoe that skated good and held up.

Think back to when you first got a pro deck, what were you more hyped on: a graphic with your name on or a shoe?

I was so stoked on both but if I had to say probably the shoe. it’s really hard to get your name on a shoe and you get full advantage to make the best shoe you always want to skate.

How about the part itself… was it made up from leftovers from Stay Gold? You can’t have had much time to gather new footage so soon after Stay Gold come out…

There’s some left overs, but there’s a lot of new footage. Miner and I worked really hard together on this one. It was mainly just us and not the whole team so I think it easier to focus. To begin with they just wanted to use leftovers to make a little clip online then we ended up coming up with a lot of new stuff given the time.

As a pro skater this side of the decade, do you feel under any pressure at all to produce more content as the online edit takes over the skate DVD?

What surprised many is how both parts could essentially be interchangeable, they’re both so good. What approach to filming did you prefer, the long-term project approach of the short but exciting turnaround of footage?

I liked them both. The short-term project was a lot more stressful because I didn’t have much time and it was a clip of only me, not the whole team. I prefer the long term just because it’s easier to get the tricks you want for your part.

Are you stoked with how both parts come out?

Yeah I’m stoked on them, there’s always more tricks I wish I could have got for them but time just runs out. I think Miner killed it putting it together. I think that makes it more enjoyable to watch when they’re edited really good.

You have a good mix of East and West coast skating in your parts… what elements of each do you enjoy skating the most and why?

I really like skating the West because SF is so fun. There’s nothing like bombing those hills and skating all the natural bumps- it’s truly like nowhere else. I like skating the East because the spots are a little bit more beat up so you usually have to do some fixing up and the spots turn into a challenge to skate.

Who had your favorite part in Stay Gold?

My favorite part was Leo’s, just seeing him skate is so gnarly and he just loves to skate. Herman also had one of my favorites; all those picnic table lines are amazing. I love everyone’s part though for their own way of skating.

Leo obviously was a deserved winner of SOTY but was there anyone you skate with often that kills it that you think was overlooked a little?

There’s definitely a lot of skaters who kill it but Leo I think deserved it by far.

What trip in 2010 did you enjoy being a part of the most?

My favorite trip in 2010 was to China with Emerica filming for Stay Gold. It was a fun crew and awesome skate spots.

You just got a house right? What’s it like? Got any plans for it?

Yeah it’s cool, big back yard, farmer’s porch, fire place, garage, it’s just really comfortable. I’ve been doing work here and there a lot the whole time I’ve had it, mainly tile, painting and yard work. I’m planning on making a sick ramp in the back yard this summer.

What about when you hang up your trucks?

I would like to own some cranberry bogs I think they would be fun to try and run. Plus, I just like all the land that comes with it.

What would you be doing right now if skateboards were never invented?

I was going to a tech school which is a school where you do regular class work like your math and science, and the next is your shop class, I was in marine machines where I worked on boats. I would probably have tried to get a job in that field.

Just keep skating and have fun.

Win a package of Brandon Westgate ‘s sponsors that includes a Zoo York board, Bones Swiss Bearings, Hubba Wheels and a pair of his Emerica signature shoes here this weekend.