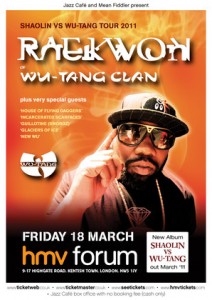 Opening for Raekwon can never be easy. Let’s face it, everyone is there for the main man and whilst there were plenty of people in the venue, it wouldn’t have been a surprise to see the support acts find it difficult to get motivated infront of a crowd who only had the Wu member on their minds. However, as UK stalwart Verb T stepped to the stage with Fliptrix and Jam Baxter, along with their man behind the decks, DJ Madnice, the energy was top notch from the off. All three rappers gave their all, bouncing around, pumping fists and even bringing the crowd out of their slumber for some call and response – a sterling effort and proof the UK can still do it big.

Then it was time for the main event, though at almost 10.45, Rae had kept people waiting enough for his entrance. Still, all that yawning and feet aching was forgotten when C.R.E.A.M. blasted out over the speakers and the portly, beanie-clad MC appeared from the back to face his adoring fans. He ran through tracks from his recent albums, Cuban Linx 2 [Ten Bricks and House of Flying Daggers were stand-out] and his current release Shaolin v Wu Tang whilst interspersing with classic Wu Tang material, which, of course, got the biggest cheer from the crowd.

Slow to warm up, he was soon in his zone imploring the crowd to look after their mothers and grandmothers whilst telling his fans that he never thought he’d ever get the chance to play in London, let alone keep coming back and enjoying every second. In fact, he said, he was looking forward to going to the nearby Jamaican food spot because the owners love his big belly. A lot more charismatic than most people would think, the Chef then bigged up ODB and Nate Dogg before his DJ dropped a medley of classic old tracks that influenced him and Wu in the early days.

It wasn’t the greatest show ever, but clearly Raekwon is an MC to be admired and respected. Stopping a track after one verse was a bit tiresome but when you’ve got so many bangers, it’s hard to fit everything in. Overall, a good night was had and the amount of Ws in the air was testament to the popularity of the crew – Wu Tang never dies!