Sonisphere Festival have announced 23 acts who will play the rock event this summer over the weekend of 6th-8th July. Confirmed headliners include Queen (with Adam Lambert), Faith No More, and KISS. Other acts included in the announcement today include Evanescence, Wolfmother, Tim Minchin, The Darkness, Flogging Molly, Fields of the Nephilim, Lacuna Coil, Gojira, Ghost, Incubus, Marilyn Manson, Refused, Cypress Hill, Mastodon, The Blackout, Andrew W.K., Katatonia, Switchfoot, and I Killed The Prom Queen.

Tickets go on sale this Thursday 23rd February at www.sonisphere.co.uk. 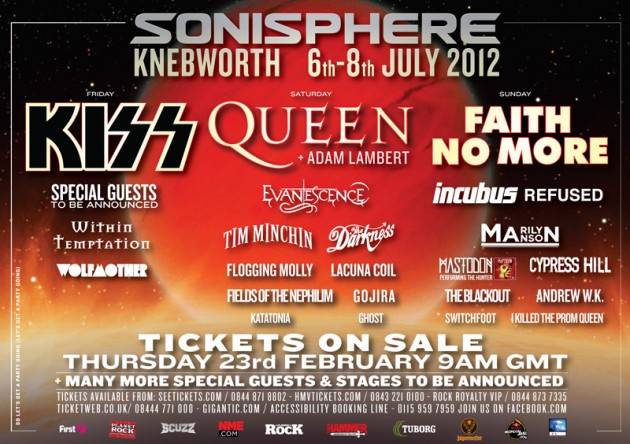 Yep, it’s that time of the year again! (Although it seems to have come along a little earlier this year). Sonisphere 2011 is upon us, and is currently doing the rounds in mainland Europe with blistering performances from the likes of Judas Priest and Mastodon. This year, however, it’s the UK’s turn to witness the Big Four of thrash – Metallica, Megadeth, Slayer and Anthrax – together on these shores for the first time in history, and it’s arguably this which has made Sonisphere one of the most eagerly anticipated festivals of 2011.

Crossfire will be in attendance, so watch out for our review of the festival afterwards. In the meantime, here’s a list of bands that we’re looking forward to; from the huge Apollo Stage big guns to the up and coming talent that will be gracing the smaller stage. There’s something for everyone here, so get involved!

Arguably the most respected of the Big Four (as well as the only one to still boast all four original members), Slayer celebrate their 30th anniversary this year, but 2009’s ‘World Painted Blood’ album is proof enough that these thrash veterans haven’t mellowed with age. If there was a nuclear holocaust tomorrow, they’d probably still be rocking out amongst the cockroaches, but for now, the smart money’s on them inciting the craziest pits at Sonisphere.

What we can we say about this lot? Well, all you need to do is watch thier spankling brand new video here and decide for yourself if this is not one of the raddest bands that will play this festival. Get in there.

Some people (mainly fools) complain that Motorhead’s songs all sound the same – and whilst it’s true that Lemmy and co. have never given much thought to musical evolution, neither would you if you could play filthy, gut-level rock n’ roll as well as the ‘Head do. Nearly 40 years in the game, and they’re still delivering the musical equivalent of a gigantic one-finger salute. Expect to hear the classics (‘Bomber’, ‘Ace Of Spades’, ‘Overkill’, etc.) plus maybe a track or two from their surprisingly good recent album, ‘The World Is Yours’.

The beauty of a Gallows show is that you never know exactly what you’re going to get. With a suitably livewire stage presence, a penchant for audience participation, and rumours of new songs nearing completion, theirs is not going to be the most predictable of sets. That said, the likes of ‘London Is The Reason’ and ‘Abandon Ship’ are arguably the finest marriage of hardcore fury and rock n’ roll awagger that you’ll hear all weekend.

Coming across rather like a evil hybrid of Stone Temple Pilots, Machine Head and early 90’s Metallica, these upstarts are cut from a more abrasive cloth than the majority of their South Wales musical brethren. It’s still early days for Revoker, but they have determination and vigour on their side, and are sure to give it 100% at Sonisphere.

Brace yourselves for this lot, because they’re gonna hit the festival like a sonic wrecking-ball of a band. The Canadian hardcore quartet seem to be getting better (and heavier) with time, and with the indefatigable presence of Liam Cormier on vocals (seriously, this man has no ‘off’ button), they could well be the Bohemia stage’s crowning glory.

Long week at work/school? Well, remove your brain, pop it in its spongebag, and then get yourself down the front for Cerebral Ballzy; five guys from Brooklyn who deal in short, sharp bursts of wonderfully sloppy hardcore punk, and who aren’t afraid to revel in their own idiocy. Full video interview coming from them very soon from their date at Camden Crawl, watch this space.

There’s something slightly unhinged about Turbowolf. Maybe it’s the way that vocalist Chris prowls the stage, seemingly more hungry for the audience’s blood than their approval. Maybe it’s the way ‘Bite Me Like A Dog’ kicks its way into your subconscious in a mass of skewed electronics and thunderous riff action. Or maybe it’s the band’s ability to whip a room into a writhing, slamming, sweaty mass of bodies wherever they go. Either way…go see.

The brainchild of former yourcodenameis:milo singer/guitarist Paul Mullen and Bloc Party bassist Gordon Moakes, you might not expect them to be the most hard-rocking of bands, but you’d be wrong. Debut album ‘Crisis Works’ is a mix of scratchy post-hardcore guitars and bowel-loosening grooves, with Mullen roaring himself hoarse over the top of it all. Essential stuff.

Head to www.sonispherefestivals.com for tickets and more info and we will see you there.