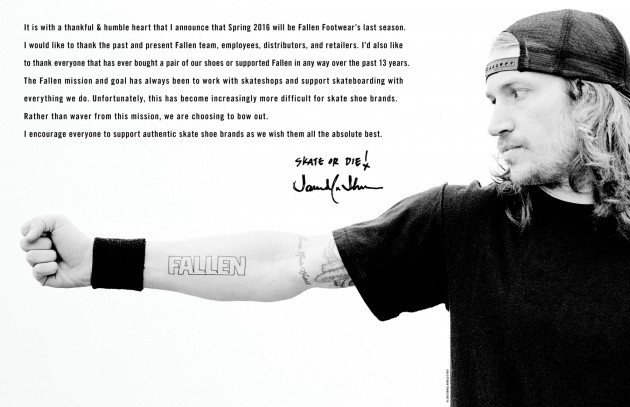 Regardless of whether you pushed your rig in Fallen Footwear or not, the fact that a legendary skateboarder has had to close his shoe business down, is not only sad to hear, but paints a dark picture of exactly what is wrong within the skate industry in 2016.

Jamie Thomas, the brand’s head honcho, has given his entire life to skateboarding. He created brands that left a strong legacy in the history books, building and supporting teams that have pushed skateboarding forwards, taking a leap of faith into everything he has done with solid commitment. It’s a real shame to see any skater owned shoe brand close after 13 years of hard graft, but that’s sadly today’s news, Fallen’s Spring 2016 shoe run will be the last.

Generally, the skate scene has always looked after its own. Those who have decided to move into the business have pretty much, worked together through the good times and the bad. Dwindle distribution assisted Thomas when Black Box dist came to an end but unfortunately that goodwill still could not stop the fate of what was announced today.

Skateboarding’s independent standing in world business has always remained unique because generation after generation have fought for keeping skateboarding within skateboarding; fighting tooth and nail to keep skateboarding out of the clutches of billion dollar corporations…until now. Their heavyweight influence is rapidly eating into the foundations that skateboarding was originally built upon, so it’s now up to you to try and reverse that trend by voting with your feet and supporting brands run by skateboarders – that’s if you care enough about where your scene came from.

Remind yourself of the goodwill that skater owned companies stand for from this clip. The rest is in your hands. Choose Skateboarding or lose it completely.