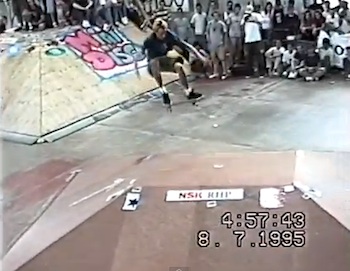 This was a rare treat to wake up to this morning. Tony Hawk, Lance Mountain and Steve Caballero skating street at Radlands UK Champs comp back in 1995. Northampton’s most historic skate park hosted the best jams ever back in the day.

Long live the memories of all of the sessions that went down there. Enjoy this.

Back in the late 80’s and early 90’s indoor skateparks where hard to find in the UK and with many winters of discontent, skateboarders had very little choice compared to the unbelievable amount of skate parks in and outdoors that are built for us these days.

One park in particular that lead the way was Northampton’s Radlands, that hosted many comps and sessions that went down in skateboard history and since it’s closure back in 2004 local skaters have had to put up with fines being dished out if you skated in the town and have been against the grain in terms of people listening to calls that they needed a new skatepark.

This week it has emerged that Northampton Borough Council will help to “fund the creation of a skateboard park of “national importance” in the town”. £250,000 will be raised to fund the project and a location is being sourced although possible locations include The Racecourse, Midsummer Meadow and Sixfields. The park is said to be ready to ride in Easter 2012.

Well done to all locals who made this happen, let’s hope that Northampton will be back on the map for UK skateboarding.

Enjoy this footage of Tom Penny at Radlands from 1995.