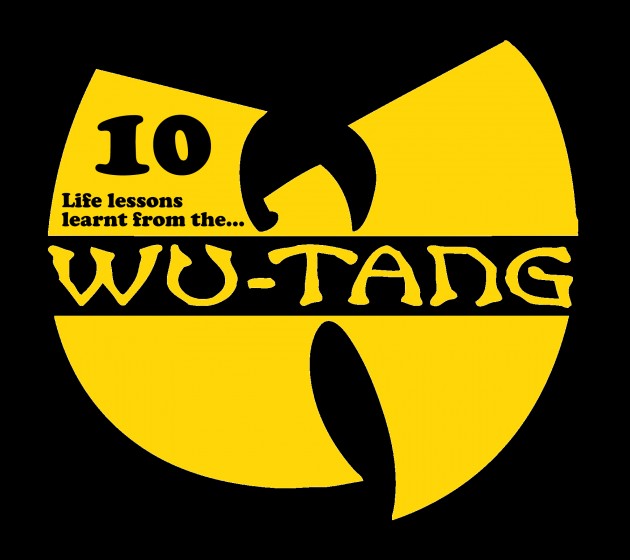 Back in 1997, the summer I turned 18, I was finishing school and I had no idea where I was heading. What I did know was that I loved Hip Hop and in particular the Wu-Tang Clan. The rap super group had just released their sophomore album ‘Wu-Tang Forever’ and it was a double disc extravaganza of stanzas that solidified their legend status and tore away any of the glitz and glamour that was rapidly infecting the culture. ‘Wu-Tang Forever’ dropped at exactly the right moment to shine a light for all the fans who were finding it hard to associate themselves with vinyl suits, blowing wads of cash on fizzy wine and sing-a-long hooks. RZA said it best as he closed off ‘Bells of war’ (Track 8, Disc 2) “Pick up the Wu-Tang double CD and you’ll get all the education you need this year”. So, what has the Wu-Tang Clan taught me? Here are 10 important life lessons from the Clan. – Ralph Lloyd-Davis 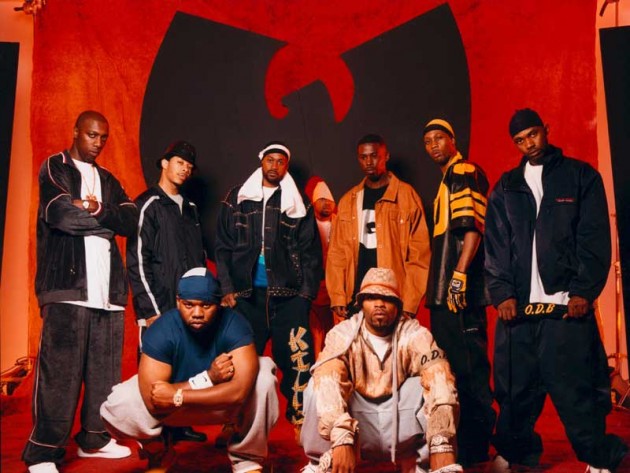 The first lesson I learnt from studying Wu lyrics was the economic reality of living in a low budget environment. ‘C.R.E.A.M.’ is probably the most infamous track off their debut album ‘Enter the 36 Chambers’ where Raekwon the Chef and the Rebel INS Inspectah Deck recount their struggles coming up in the ghetto as Method Man chants the acronym of truth “Cash Rules Everything Around Me – CREAM! Get the money, Dollar Dollar bill yo!” This chorus was a wake up call to say that if you’re not earning a living in this world, it won’t stop for you. In today’s economic climate with an already massive and steadily growing divide between rich and poor and a shrinking middle class, I’m surprised the Clan hasn’t been invited to talk at more political rallies or market forums.

The second lesson was delivered on Method Man’s debut album ‘Tical’, the second album to come from the Staten Island-based stronghold. It wasn’t a lesson in street smarts or how to spend thousands of dollars frivolously. It was a lesson in love. ‘All I Need’ featuring R & B royalty Mary J. Blige, is a love song between a man and a woman where their steadfast support of one another has helped them surpass any obstacle in their path. The duet is inspired by the famous soul duet between Marvin Gaye and Tammi Terrell of the same name, and is given a modern day twist with Method Man’s slang and a sample of Notorious BIG’s ‘Me & my Bitch’ (“Cry together, lie together, I swear to God I hope we fucking die together”), which in itself is a melancholic tale of a turbulent love affair. Method Man’s promise of “mad love to give” his girl and his admiration for her having a “mind of her own” are testament to a mutual respect for the opposite sex that is often missing from rap lyrics. In any case it taught me to look for a strong independent woman to love and not just a pretty face.

Lesson number three (also known as Rule 4080) was taught to me by the GZA a.k.a. the Genius, a name that already inspires enlightenment. The GZA is probably perceived as a wiser member of the Clan due to his prior experience with the music industry. Before the Wu-Tang Clan stormed onto the scene, the GZA had already released a solo album on Cold Chillin Records entitled ‘Words from the Genius’. Needless to say his solo career under Cold Chillin didn’t bear fruit, so when he had a second opportunity to drop a debut album (thanks to some clever deal brokering by the RZA that ensured each member of the Clan could sign with a second label and release solo material independent of their group contract), he let rip on the shady side of the record business with his song ‘Labels’. In just under 3 minutes, the GZA taught me all about how the record executives, A&Rs and other nefarious characters will try and screw over the recording artist and neglect their talent. The most impressive part is that GZA fires shots at virtually all of the existing labels by using their monikers as double-entendres, for example “We’ll all emerge off your set, now you know God damn / I show living large niggas how to flip a def jam / And rough up the motherfuckin’ house cause I smother / You cold chillin’ motherfuckers, I still warn a brother / I’m ruthless my clan don’t have to act wild / That shit is jive, an old sleeping bag profile”. Thanks to the GZA I understood fairly fast that there would be snakes and sharks in business – A fact that proved true in later life.

The fourth lesson wasn’t actually from one of the 9 emcees but instead from one of their close affiliates, Poppa Wu. On Ghostface Killah’s debut album ‘Ironman’, the subject of faith and religion was introduced quite frankly in several of the featuring songs. On track 13 ‘Black Jesus’, Poppa Wu preached openly about the knowledge of self, (Black) Man being God and time being infinite thus debunking the fable of Adam and Eve and the dawn of creation. These views are foundations for the Five Percent Nation, a faith that separated itself from the Nation of Islam during the 1960’s. The Wu-Tang Clan often refers to man as God and woman as Earth which is direct use of the Five Percent lexicon. I am not a religious person, if anything I’m an atheist, but it’s always good to get another perspective on what this life is all about. Something that always stays with me is when Poppa Wu says “Don’t you know if a man could take and flip himself inside out, God, He’ll fall out and die if he sees the shit that goes on…inside?” Conscious observations such as these are food for thought when you think about how complex the human body is and how much we take it for granted.

Lesson five was a hidden jewel that I didn’t find for quite sometime. Listening to Raekwon’s stellar debut album ‘Only Built for Cuban Linx’, there’s a skit before ‘Spot Rusherz’ (track 14) where Raekwon and Ghostface are procrastinating about the heat in their car and an unreleased Wu-Tang song is playing in the background. I finally tracked this song down to a mixtape by DJ Format promoting the American beer St. Ides. The St. Ides track endorses the beverage but more importantly it serves a cautionary warning against drink driving. Raekwon explains how it’s alright to carry on drinking as long as you catch a ride home and don’t get behind the wheel yourself: “With St. Ides in my system / Crack another I’m blessed, let’s go get the next one / And get over, the object is to stay sober / Lay on the sofa, better yet, dial my chauffeur”. Don’t drink and drive kids.

Lesson six is about sex. Safe sex. At the height of their popularity the Wu-Tang Clan were dropping solo albums, mixtape and radio verses and featuring on just about every compilation CD being burnt. One of these compilations was ‘America Is Dying Slowly’ which set out to promote safe sex amongst the youth. The Clan got the title track ‘America’ with each Clan member recounting their experiences and knowledge about sexually transmitted diseases and how to prevent catching them. I guess this song went to my head and my heart because I lost my older brother to AIDS and I know for a fact that it’s easier to get caught up in the heat of the moment and skip that simple gesture of protecting yourself and others.

The seventh thing I learnt from the Wu – and they actually mentioned this on two occasions, first by honorary member Cappadonna (‘The Pillage’ track 3) and then by Ghostface Killah and featuring artists Jadakiss (‘Pretty Toney’ track 17) – was don’t get caught. Run! ‘Run’ paints a vivid picture of what it’s like to escape the Police and the risks you face if you get caught. As an 18 year old Hip Hop fan, I was getting up on walls with my marker pens regularly and smoking a lot of weed in the street, so I always had my eyes scanning the horizon for undercover detectives and have-a-go heroes looking to spoil my fun. After a few run ins with the law and other unsavoury characters I eventually relinquished these pastimes. In fact, I do remember distinctly pulling up my baggy jeans and tying my shoe laces properly after getting chased through the wrong neighbourhood late at night by some stick up kids. Swag isn’t going to save you from getting stabbed. Lesson learnt.

A step away from the abstraction of Five Percent Nation philosophy, the RZA has a penchant for conspiracy theories notably with his verse on ‘School’, track 14 of Masta Killa’s solo album ‘No Said Date’. My eighth lesson was all about not accepting everything you’re taught in school and questioning history. The song starts off with Masta Killa rapping about his introduction to the rap culture which is nice enough but the real main course of knowledge is delivered by the RZA as the beat speeds up to accommodate his feverish flow. As a child, RZA questions his teachers lessons and is quickly asked to leave and reprimanded for disrupting the class. The facts RZA speaks about aren’t necessarily true, but they do shed like on a few questionable moments in the history of the human race and possible cover ups. Here’s an example of RZA’s outburst: “I stood like a man then I questioned my teacher / Why don’t we speak about the wisdom of the sages? / And how did Europe black out in the dark ages?/ And when they got light did they white-wash the pages? / And the inquisition, why was Christian’s thrown in cages? / And why would they try to destroy the nation? / With their birth control and bring control fluoridation? / And why it seems that half the school is racist? :She said “Diggs, to the office!” We about faces…”

For their ninth lesson, the Clan taught me about life in the ghetto, something a lot of rappers could claim responsibility for but Raekwon, Ghostface, Cappadonna and U-God broke it down into easy to understand verses. the self-titled ‘Ghetto’ (track 11 of Ghostface Killah’s ‘Apollo Kids’ album) is a soulful stroll through the tougher side of town. With the soulful prompts of Marlena Shaw sampled from ‘Woman of the Ghetto’ each of the rappers covers a select theme: the scene in the ghetto (Raekwon), making money (Cappadonna), dealing with snitches (Ghostface) and raising kids (U-God). Obviously the picture painted by each rapper is pretty stark and unglorified but it’s cool to hear U-God talk about the solidarity of a community that the rest of society tries to forget. For someone who’s never lived in the ghetto, this is a eye opening composition. 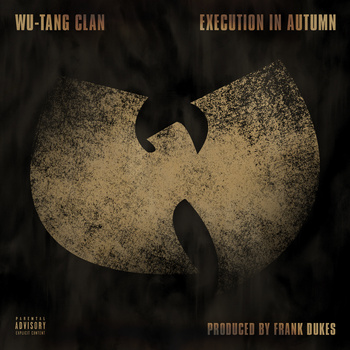