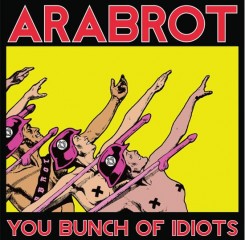 Standing alone and steadfast as the great outsider of the Norwegian music scene since his inception in 2001, Kjetil Nernes’ one-man arts-and-music project, Arabrot, have consistently left their cult following in awe with juggernaut-sized riffs and boundary-breaking soundscapes of distortion and doom. Just fresh from a stint on the road collaborating with the Quietus founder John Doran, in celebration of the publication of his recent memoir, it is with huge excitement that we report Arabrot will be releasing a brand new EP titled You Bunch Of Idiots on June 23rd.

To mark the occasion Arabrot are streaming ‘Mea Culpa’, a grinding and onslaught of foreboding dirge inspired by Nernes’ recent battle with throat cancer, which Nernes explains was written one afternoon whilst drinking alone in a deserted London pub, shortly before being informed of his alarming health condition. “I didn’t know how seriously ill I was at the time but something within didn’t feel quite right,” he recently told Noisey. “The gargoyles on the Victorian houses opposite [the pub] were gazing down at me.”

Stream ‘Mea Culpa’ below and hear Kjetil conjure his trademark vocal snarl, wrought with disgust as he spits out a striking yet doubly catchy mantra of, “foul mouth!” through gritted teeth.

You Bunch Of Idiots will be released June 23rd via Fysisk Format / Eolian Empire.