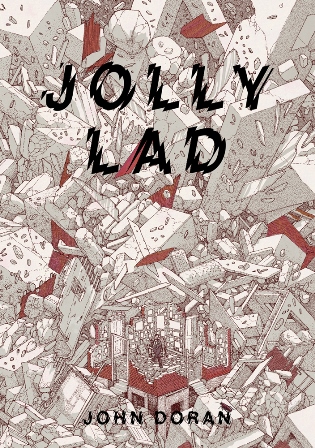 Widely respected journalist and founder of The Quietus, John Doran, has announced the publication of his memoir for this coming June via Strange Attractor.

The book, titled Jolly Lad, is said to explore the authors recovery from alcoholism, habitual drug use and mental illness, and also his thoughts on the healing power of music, how memory defines us, the redemption offered by fatherhood and what it means to be working class. It features cover art by Simon Fowler and the illustrations of Krent Able.

The book is loosely based on Doran’s insightful, and often hilarious, MENK column, originally written for Vice magazine. However, the author stresses, “this is not a ‘my drink and drug hell’ kind of book for several reasons – the main one being that I had, for the most part, had a really good time drinking. True, a handful of pretty appalling things have happened to me and some people that I know or used to know over the years. But I have, for the most part, left them out of this book as they are not illuminating, not edifying and in some cases concern other people who aren’t here to consent to their appearance. Instead this book concentrates on what you face after the drink and the drugs have gone.”

To accompany the book, Doran will also be releasing an album entitled Hubris featuring spoken word from Doran and music from Nicky Wire, British Sea Power, Grumbling Fur, Teeth Of The Sea, GNOD, Eccentronic Research Council, Bronze Teeth and many others.

He will also embark upon a 31-date reading tour of England as a temporary member of Arabrot for the full month of May. Gigs are reportedly booked in numerous prisons, churches, libraries, record shops and cinemas with more details to follow.