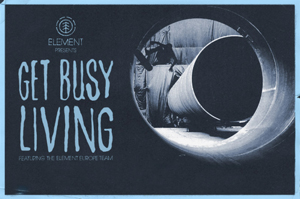 Skate documentaries are – sadly – regularly overshadowed by the films that treat skateboarders as though they couldn’t begin to comprehend something as bold as a narrative. I’ve always been encouraging of skate flicks to have a little more talking and some more creative substance; despite the medium being able to stay afloat without them (I know when I was younger I was the sort to pick up magazines and just look at the pictures, I’m sure I wasn’t alone). Because when this is pulled off right (see Hot Chocolate or Under Wraps) they can reign among the best videos you’ve ever seen. Patrik Wallner’s visual journal of his trans-Siberian trip into some of the world’s most unique spots skated by some of the world’s most unique skaters not only achieves this, but its one of the best.

Running at 46 minutes, the film positions us first in Moscow, then proceeds to follow the troupe all the way to Hong Kong and not once does it tempt your attention to waver from it. The balance between commentary and pure skateboarding is perfect, and it’s not as if the stories are something every skater can’t relate to; it’s a film about getting out there and trying some new things after all. And it doesn’t exaggerate of romanticise anything like some sort of Wes Anderson film, even though the soundtrack isn’t far off one (no complaints, it’s perfect). This is fully gritty-gritty, you can feel every bump, the visuals themselves carry a sort of humidty, it’s rad.

The skateboarding alone is on a mesmerising tip, in which John Tanner really shines (his LINE on the Great Wall Of China is unfuckwithable), Michael Mackrodt kills it and Dan Cates does his thing on sketchy spots that no one else would dare touch. There are some slept-on skaters in there too; Stas Provotorov, Laurence Keefe, Lesha Naimushin, Danny Hochman and Dan Zvereff should cause a lot of you to start following them on their proverbial real-life Twitter account. Oh and Kenny Reed is in there, did you really doubt that a video that drifts through the barren landscapes of Mongolia and other washing-line riddled spots wouldn’t have his name written all over it? He steps in late and despite being plagued by illness and tropical injury he does the stuff he can do and no one else can. Big, stylish fakie tricks to introduce gliding lines; Kenny is one of my all-time favourite skaters to watch.

At certain moments, the documentary does what all documentaries try and rarely succeed in doing, prescribe the viewer with the feelings and emotions of those being documented. During the standing-class and sleeping-bus segments I felt crippled by claustrophobia. There is a strong sense of involvement in the group we’re following and the filmmaker should be applauded for this triumph, so don’t hesistate to pick this one up. It’s interesting, it’s full of spots you’ve never seen before, it’s great fun and it’s super sick.