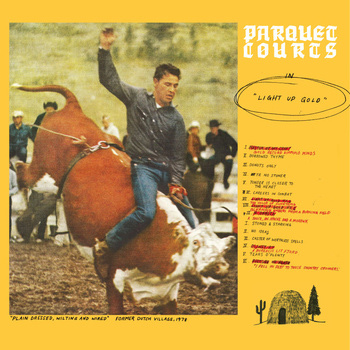 The words Parquet Courts may not mean much to most just yet, but punk and indie listeners on both sides of the Atlantic are going to get a fine taste of pure American post-teen rock rowdiness coming their way soon.

This New York four piece throw out pumped-up attitude with the passion and devotion for great, original rock music before coating it with the texture and flavour of a steak done rare. The band previously released a 4-track EP which was exclusively available on cassette and have followed that with a stunning fifteen track LP titled ‘Light Up Gold’ that pays homage to the likes of the 80’s US post punk scene and has the drive of the very best indie out there.

Vocalist Andrew Savage leads the pack with gritty, iconic vocals on opener ‘Master of My Craft’. His lazy style emanates the East Coast’s post-punk scene beautifully and he also delivers some pretty tasty lyrics too.

Parquet Court’s personality shines with every snare that drummer Max Savage makes. Don’t assume the brothers are doing all the hard work though, the marvelous rhythm, lively guitar and driving bass fuse together to move with soul in ‘Tears O Plenty’. What really works on this full length though are the jagged chords that are filtered with a vintage fashion in ‘Borrowed Time’, ‘Yr No Stoner’ and the absolutely must have: ‘Stoned And Starving’. This record has a wide variety of tunes that include the moody ‘N Dakota’ and gratifying melodies in tracks such as ‘Disney P.T’ plus title track ‘Light Up Gold’.

This album is one of the most exciting finds of the year so far. Look out for them this week as they cruise through London to play three debut shows. If their live sets are as spiky as on tape, then you will be in for a treat.