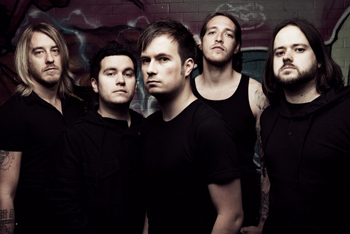 It’s been five years (seven if you don’t count the El Mark EP) since we’ve heard all these words in one sentence but Glassjaw have confirmed the release of a new single this month.

All Good Junkies Go To Heaven was available on 7″ as of last night but has already sold out! New stock may be coming in before its shipping date of August 20th so keep an eye open for more information.

Is this the first real sign of a new physical album release soon? Let’s hope so.

United Nations is somewhat of a supergroup yet they’re one that doesn’t really shout about it. They play shows, write and record music, release the music independently (through Deathwish) and occasionally play live. People like them. Yet there hasn’t been a great song and dance about them yet. I guess it helps that their name is virtually ungooglable. And the exact identity of the members is somewhat of a mystery, apparently partly due to certain people being obligated by certain record contracts. However, they are led vocally by Thursday’s Geoff Rickly and it’s really awesome to hear him properly let rip on some rather aggressive vocals as opposed to his more melodic tendencies in (the equally awesome) Thursday. Glassjaw’s Daryl Palumbo and Converge’s Ben Koller are also rumoured to be involved.

Never Mind The Bombings… is the band’s latest release and has been released as a 7” EP and download. It’s a full-on onslaught of crushing drumming, searing riffs and head-combusting vocals that’s definitely not for the faint-hearted. The music lies somewhere between Converge and Thursday and comes across as a viciously cathartic experience for all involved, whoever that may be. The EP is a melting pot of hardcore and metal influences and is really just a taster of what this band is capable of doing live. Fast, hard and uncompromisingly heavy, let’s hope there’ll be more touring soon.