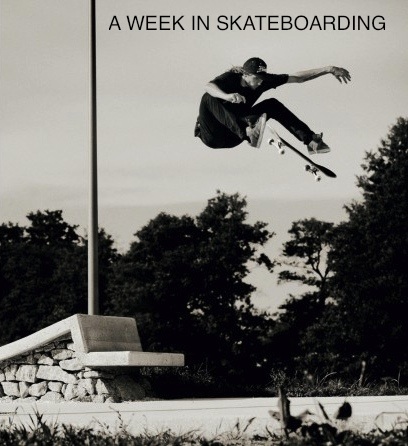 Another very wet week for British skateboarders passes with a weekend of downpours scheduled. Check the forecast as it doesn’t look like the streets will be your first call for a session this Saturday and Sunday unless you are living up North where the sun is scheduled to shine.

This week has had surprises and some fantastic edits to watch from around the globe. Firstly, next Monday will reveal the winner of the Winter video edit comp. If you have not voted for your favourite videos yet then use the wet weekend ahead to get stuck in here. Secondly, next week will welcome the arrival of Danny Way to the UK for the London screening of ‘Waiting For Lightning‘, a full length documentary on his incredible skateboarding life. We are hyped on this one so come along with us, there are 2 free tickets and some shoes courtesy of DC here. Again, the winner will be revealed on Monday during the day in news.

Talking of DC, their Embassy vote has been open this week. Vote for your UK ambassadors Chris Oliver and Neil Smith, two of the best we have are in the mix amongst Salabanzi, Pfanner, Nyberg and more.

Our favourite edit of the week comes from Kris Vile and Sam Partaix who mixed concrete for this latest Vans edit in Lyon. Also heading to Europe this weekend are the Palace Skateboards team who will be on tour with Pontus Alv’s Polar lads from Monday in Malmo. Jerome Campbell will be joining them after officially leaving Blueprint this week to join his new Converse team mate on Polar. The footage from this tour should be one to look forward to.

Back on home soil, Gnargore are back with a new DVD, AD from Drawing Boards has 40 hand painted decks on show in Brighton. Element (Levi brown pic)have announced a Make It Count comp at Bay 66 in London, French has a new art show coming in May, Doug Parmiter showed us how to skate a pole jam in Kingston and new portable benches are coming from 1skateparks. check the prototype.

There were two new parks that emerged in the news this week. The new Maverick skatepark in Market Harborough looks superb and Halifax locals in West Yorkshire are literally biting their nails awaiting the opening of a new indoor park called Mags On Ramps. Bizarre name for a skatepark but hey, the locals will be dry and happy. Well done to all involved.

US edits that caught our eye this week were kicked off with a day in the life of the legendary Dan Drehobl. Furby filmed some extra footage ahead of the Deathwish video to get you hyped and the Chocolate team hit the road to Central America. This Green Diamond night edit featuring Brian Delatorre was watched a few times too, he also features in this edit from the Habitat tour of Portugal. Check it out. Rob Harris captured some good beer drinking and after hours shredding.

Click here to see this week’s skateboard news in thumbnails and RSS feed the page to get your updates as they drop. If you have news to send in, contact us.