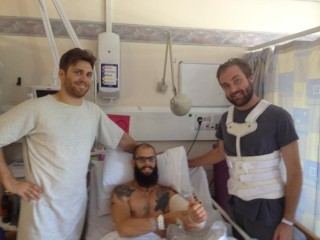 It appears the brave Baroness guys are on their way to a full recovery after receiving injuries when their tour coach overturned whilst travelling between shows in the UK. Guitarist/vocalist Peter Adams is already back in the USA and the rest of the band are now well enough to post an update via Facebook:

‘Thank you to all of you who have been sending the tidal wave of positivity our way. We are uplifted by its sheer magnitude, and power. Every single one of you is making our days and nights easier and our recovery quicker. Thank you all so much, we are truly lucky to have such incredible people on our side. A sincere and heartfelt thank you from each of us to each of you.

Its great to see the band staying positive and on the way to full health. We wish them our best and can’t wait to see the sludge-rock heroes back on the road again.

Find out more about the coach crash here.

It is reported that sludge-metal band Baroness have been involved in a serious road accident on their journey between gigs in Bath and Southampton.

Emergency services were called to Brassknocker Hill, in Monkton Combe, on the B3108 at its junction with the A36 Warminster Road at 11:30 BST. Two people on board suffered multiple fractures and were later freed by firefighters whilst seven other members had minor injuries. Details as to what caused the crash remain unclear, however eye witnesses have reported that there was low visibility due to weather at the time of the accident.

On the band’s official Facebook page the following statement was posted:

“Baroness were in a serious bus accident last night near Bath, England. The band members and crew are recovering at local hospitals. All tour dates are postponed until further notice.”

Meanwhile, the promoter for the Baroness show in Southampton, scheduled for tonight, announced:

“It is with great regret that we have to inform you that Baroness were involved in a very serious road accident earlier today and will not be able to perform at Talking Heads tonight. Our thoughts are with the band at this time and we wish them and their crew a speedy recovery.”

Here at Crossfire, we would like to reflect the words of many fans and wish Baroness all the best and a quick recovery.