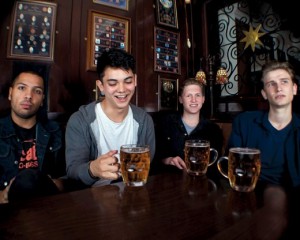 Exciting folk/punk prospect Crowns have unveiled a new video for forthcoming single ‘Parting In The Porch’ which is out 29th October 2012. Vocalist / guitarist Bill Jefferson comments on the track:

“It’s a nostalgic letter to my younger self, remembering parties on the beach, chasing the girls. Really it’s about the realisation that you never actually lose that dangerous innocence.”

The single is taken from debut album ‘Stitches In The Flag’ set for release 5th November 2012. The 11 track record was recorded with Tim Goalen (Mark Ronson, Crowns EP) and Richard Woodcraft (The Vaccines, Arctic Monkeys). It’s set to highlight an already promising year for the Cornish band who racked up live performances at Reading & Leeds Festival, Bestival and a support slot with Blink 182 over the summer.