Sims has released a free EP called Wildlife for all to share.

The Doomtree rapper, who released his Lazerbeak produced album Bad Time Zoo earlier this year, recorded the five songs between 2009 and 2010 and has asked all fans to share the link around as much as possible, adding that if they do it on twitter, they should add the hashtag #wildlife.

Check out the EP by heading to his Bandcamp page, where you can both stream and download it. Most definitely worth your time, get involved 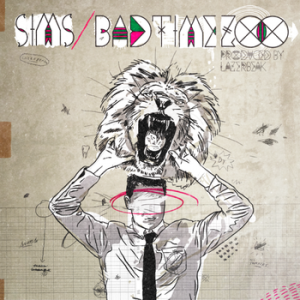 Having released his debut album Lights Out Paris in 2005, it took a good while for Sims to bring out the follow-up but it was most definitely worth the wait. Bad Time Zoo is 14 track record full of cutting lyrics which range from the apathy of modern society to the simple fact that the MC loves his girlfried all layered over supremely powerful production from Lava Banger creator Lazerbeak.

Opening up as he means to go on, the Minneapolis rapper claiming that we “dropped the borders but we kept them walls” and being “so close I could almost see your breath / but so far I can’t hear your words” before lamenting the so-called “time of plenty” whilst all the while feeling like something is missing.

It’s a theme that runs through the album but never once falls into the preaching category, which is a testament to the ability of Sims’ lyrics, who despite all the problems we face implores us to “drop that cynicism” on Weight. Listening to these beats, that task doesn’t seem quite so difficult.

Relying more on his own talent than bringing in scores of guests, Sims does relent on Too Much by having P.O.S. giving his take on a near-disasterous road accident. Far from taking away from Sims, it simply goes to show how talent the Doomtree camp are as both mould their flows over the beat in their own inimitable style.

It’s impossible to pick a stand-out track on the record, such is the quality of the output – every time the play button is pressed, a new favourite presents itself. Suffice to say it’s worth multiple plays, so that every layer of the rap patchwork can get its time to shine, something it does brighter than ever.

The production is similarly tight all the way through the album from the horn led melody of Burn It Down to the dub-influenced, piano sampling LMG, the heavy drums of The Veldt and In My Sleep to the scratched vocal samples in Radio Opaque. Lazerbeak has one-upped himself once again, providing the perfect backdrop for his crew mate. The beats fit the rapper and the rapper’s flow fits the production, it’s rare that this happens over such a consistent period of time, yet that’s what you get on Bad Time Zoo.

Whether you’re into rap bangers or introspective backpack tunes, you need to check out this album. Doomtree just get better and better and with this latest release, Sims announces himself as a bonafide king. Absolutely brilliant.

See for yourself by listening [and then supporting great independent music by buying] here.

Sims has unleashed a new video to kick 2011 in perfect fashion.

The rapper, part of the Doomtree Crew, will be releasing his new album Bad Time Zoo via Doomtree Records on February 15th. Take it from us, the album is an absolute banger so press play below on Burn It Down and become a Bad Time Zookeeper like the rest of us at Crossfire HQ!