BBC Wales have run a story today stating that Lost Prophets frontman Ian Watkins has been arrested for child sex abuse. The arrest came after Watkins was found to have engaged in sexual activity with a female under 13 and also found in possession and distribution of indecent images of children.

This is obviously shocking news to wake up to. Thoughts going out to everyone connected with the band throughout what must be a difficult time. 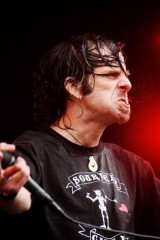