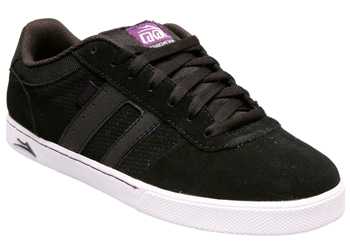 Brandon Biebel is one of the more fascinating specimens of skateboarding. Not only does he spend most of his time gathering the most quotable footage in skate video history (consider for a moment how often you’ve said ‘it hits you hard bro!’ or ‘off the nose’ in public) but he’s even managed to get himself his own world. Normally, the idea of making a soundboard filled with stuff you’ve said for the purpose of making a soundboard would make someone either batshit crazy or just plain weird. But this is BEEBS, so it’s all really, really awesome. Just like his shoes. By association, they’re instantly dope… Biebel isn’t someone who would put his name to a pair of whack kicks.

The black/purple colourway is an inconspicuously fresh touch that’s neither garish nor dull but instead a subtle flair to compliment a great low-profile shoe. It’s thinner than you’d imagine but fits snug even on outrageously misshapen feet (my own). The sole boasts the underrated Lakaitning construction (great grip, long-lasting, should be talked about more often) and is topped by a durable suede upper with some neat little soft leather bits. It’s a superbly comfortable shoe with nice ventilation so your ten little piggies never need to feel like they’re flipping boards as if they were flipping burgers in Hell’s kitchen. Standardly solid stuff from Lakai, standardly dope design by Beebs. It hits you hard, bro.