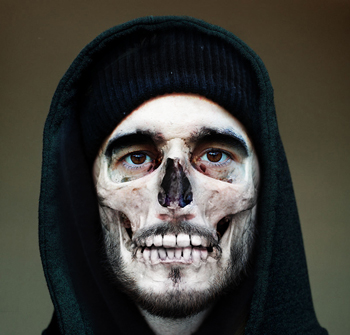 Jamie ‘Arghh’ Morley is a weird one for sure. Not because of his fairly unemployable interests and hobbies section on his probably-non-existent CV but because of how much of a gentleman he is to skate with. It’s not often you meet someone who is as inviting they are terrifying. And it’s even rarer that you come across a person who can quite jovially talk about his fairly unbelievable photographic portfolio of dead animals before shredding the shit out of what ever is in front of him desperately trying to avoid hitting a kid on a scooter. In fact that will only happen if you come across Jamie ‘The Pirate’ ‘Arghh’ ‘Kickflip’ Morley can indeed kickflip better than anyone as if heelflips were unorthodox in his bizarre youth-inspired personal religion. He could do heelflips I’m sure, but he’ll probably be too busy getting burgers tattooed on his arm and washing the smell of dead foxes out of his clothes. He’s basically the perfect fit for French’s company that emerged earlier this year, Witchcraft.

It was a total pleasure to talk and skate with him on a cold October day in Stockwell. Read on to learn more about the pirate, how Witchcraft really got started, what he’d do if he appeared on Dating in the Dark and other things you probably didn’t want to know but you’ll be glad you do afterwards, I promise…

Let’s get things started with a formal introduction Mr. Arghh, what’s your full name, how old are you and where do you hail from?

You’ve had a fair few nicknames, ‘The Pirate’ and now simply, ‘Argh’ are the ones that immediately come to mind… what’s the story behind these and have you had any other nicknames we should know about?

I looked like a pirate because I had all these gold coins and a parrot. ‘Kickflip’ was another because this one time I did one….

How many kickflips do you do during an average session?

Not many… couple hundred.

Tell us a little about your relationship with Witchcraft and Funeral Fog Hardware head honcho, Mr. Richard ‘French’ Sayer, how long have you been skating with him? How has his artwork and lifestyle influenced the way you think about skateboarding?

Ahh man, five years? His artwork’s rad, best in the biz. As far as influence goes he just helped me be myself and cemented the things I already liked about skating in my  life, showed me it was ok to hold onto inspiration from your youth, in spite of current trends, which can be hard to hold on to as you grow up.

Did you have any input towards the inception of ‘Witchcraft’?

About six pints of goats blood. 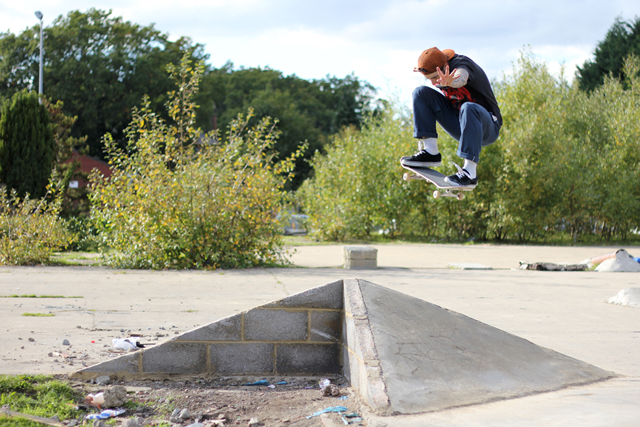 Please, if you will, describe to us in detail, exactly how Witchcraft got started…

Started out as a pretty basic sleepover; baking cakes, playing with dolls… when French brings out a Ouija board he got from Alanina Glass, a bigger girl… real mean sixth former. So after much debate we decide to try it out, we get a glass and both take hold, we ask if any spirits are there and the glass shifts to ‘yes’. We then ask ‘who?’ and the glass starts shifting all over the board spelling ‘die’, ‘fuck’, ‘whore’, ‘strangle’ and other such horrors, then there was a loud crash and the walls began to bleed. In shock, we both withdraw from the glass on the board and it falls and smashes on the floor releasing an evil spirit. The loose, lost spirit flys into French’s nose and takes hold of him… we tried to get the evil out but nothing helped. After troubled times of watching heavy metal bands with Alanina, hanging out in graveyards, skateboarding at night and drawing pornographic images, it came as no surprise that French was to spread his evil message through an evil company.

How close is this to what actually happened?

French has spoken about the company summing up everything he thinks skateboarding is about: good graphics, ideas, death metal and DIY spots etc. What do all of these things mean to you and what is it in skateboarding that you personally find to be rad?

We have pretty similar outlooks on that stuff, give or take… the building blocks I had to work with when I started out were the Questionable video and the first Zero video, then Welcome to Hell. I stand by those videos covering the bases of the things that attracted me to skateboarding. 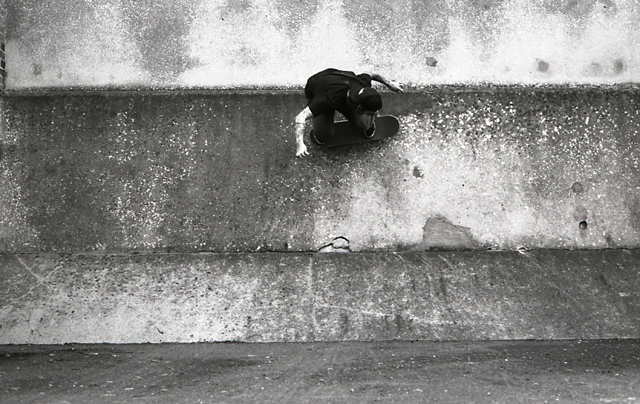 How about taking pictures of dead stuff? When did that ‘hobby’ start?

I wanted to become a serial killer one day… just trying to get a foot in the door.

How many pictures of dead animals have you taken? Are there any animals you’d really like to come across?

Couple hundred. Whatever Predator is… I could steal his laser.

What’s the gnarliest, most terrifying and disgusting photo you’ve ever taken?

Not that gnarly, but this leathery badger that had sun bleached skin with maggots inside on a hot summers day, the whole thing was pulsating with feeding maggots. The smell was so bad it stayed with me for 45 minutes it was hard not to ralph.

We understand that your other hobby is getting shit tattoos. How much of your body is covered now and what’s the best story behind one of them?

76%, I got a cartoon burger that’s the logo of this burger place in Brighton we used to go to years ago and take the triple burger challenge then crawl to punk shows and then drive home.

Recently we heard about Living TV’s ‘Dating In The Dark’ show asking for skateboarders to participate. If you were on the show and French somehow organised it with the producers that you could be as gruesome as you liked for the benefit of keeping a skater’s gnarly, what would you do in pitch black to a member of the opposite sex who had no idea who you were or what you look like?

Maybe remove the gallbladder see if they explode, I heard crows do it to frogs… 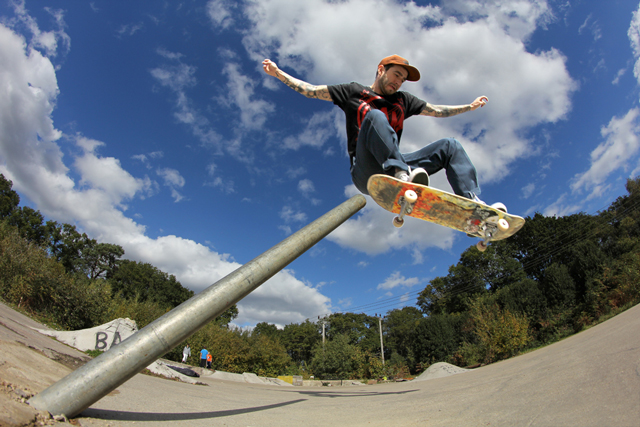 You’re known for shredding a lot of skate parks regardless of how ‘shit’ they can be. What are your top three favourite ‘shit’ skate parks in the UK to skate and what is it that makes them fun?

Oh man, I don’t want to say ’em out loud, in case they keep building ’em. There’s fun to be had most places..just fuck around

How many kids have you bumped into now? 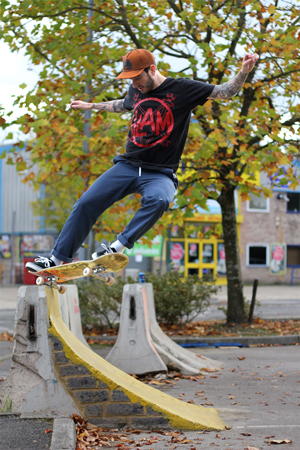 You’ve had some recent footage skating one of Laup’s newer creations since the destruction of Laupside earlier this year. Tell us a little about Laupside and the DIY spots you’ve skated…

They are just the best. Rough and hard to skate.

What’s the best thing you’ve skated that Laup has built?

The first quarter he built at laupside was rad and exciting as it was something new.

There’s something very British about customizing spots or making the most out of something very shit. I’m surprised no one over here as done an Alv and made a little film about it, would you guys be keen on making a little DIY doc with Laup and co?

Would you get Alan Glass to edit in clips of naked bitches getting cut up, or is that stuff saved exclusively for Witchcraft promo material?

He splices those everywhere-corporate promos, wedding videos… he has no shame.

You recently embarked upon a tour with your polar opposite brothers at Lovenskate. What sort of good vs evil antics did you get up to?

Got concussion on the first day, that was pretty much all she wrote for me… just usual shit, water pistol fights, shouting at people in traffic. It rained a lot, my head was pulsating with no real sense of time.

Roughly how many cups of tea were drank on the tour?

Who had the gnarliest trick/bail/hangover?

Best tour you’ve been on? 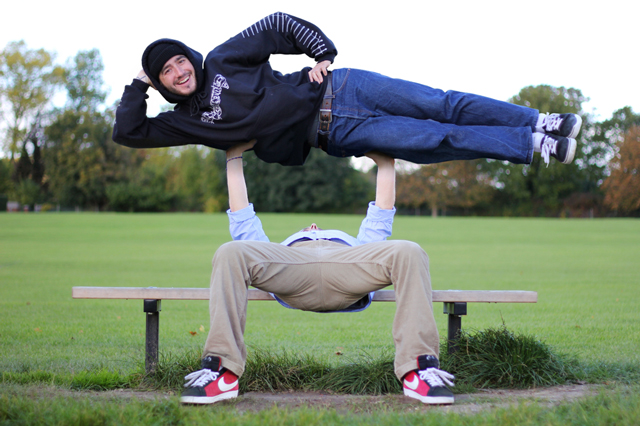 Always wipe from front to back.

Watch his superbly shot Second Coming edit by Sam Bailey below, and a short and sweet ten tricks edit that Jamie landed for Stanley in just an hour at Stockwell. Switch blunts!