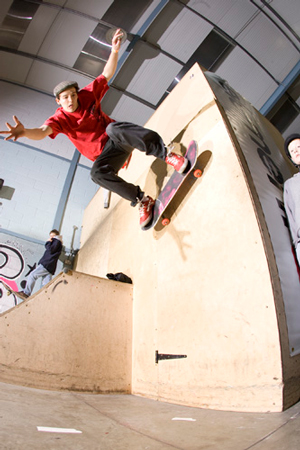 Stephen Delves AKA Joxa is your full-on ‘skate rat’ who never seems to get enough of it. Whether its skating a grubby bowl or discussing the latest Hewitt photo on the web he always seems to have skateboarding on the brain.

Hailing from the industrial town of Barrow he has now found himself stuck at the bomb site in middle earth known as Coventry. A scene well known for having a ‘skate hard and skate fast’ attitude which fits Joxa’s personality perfectly!

Not one scared to travel you will find the tea drinking, flat-cap-wearing Cumbrian at most events around the country with a smile on his face and inevitably making the comedy slam of the day. So here’s a little look into the life of this Japanese loving skate nerd.

So Joxa, let’s start off with the question that seems to start off every interview. Name, Age, Hometown etc

My name is Stephen Delves or Joxa to most. I’m 24 and come from Barrow-In-Furness which is in Cumbria.

You moved from Cumbria down to Coventry. Without meaning to be rude to all the Coventry residents…why?!

Barrow is pretty much stuck in the middle of nowhere and the easiest way to escape was to apply to universities. I didn’t want to do the common thing of applying to places close to home, like Manchester or Lancaster so I applied around the Midlands  and got accepted to Coventry. I knew a few heads from down there already and I quite liked the fact that it was a small city, so off to Coventry I went. It was such a massive change from living in Barrow. Coventry seems to be in the middle of everywhere so its easy to travel!

So now you’ve been there a few years do you still think it’s as rad?

It’s pretty good here! I’ve never really had any trouble walking the streets and such and I usually feel pretty safe. It has a lot of good spots and a good crew of skaters too!

I remember the first time I heard of you was on N26 talking about the ‘Skate Shack’. What was that?

The skate shack was Cumbria’s only indoor skatepark. It was around in the 80’s and you can see footage of it in the old Deathbox video. Inevitably, it closed down in the early 90’s but before that it had a whole host of famous pros visiting, like Cardiel and even Tony Hawk! 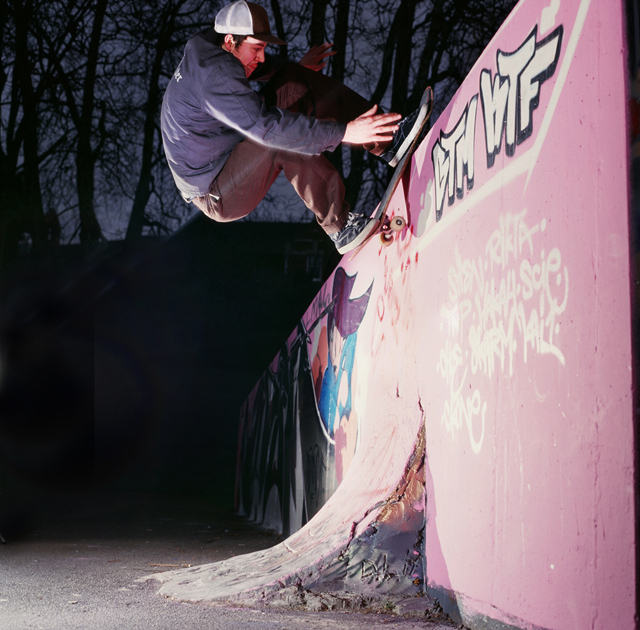 What was the scene like growing up in Barrow?

Well Pokemon cards stopped being cool and skateboarding was in. My friend got a board so I started skating with him and a few mates from school. After a couple years they had quit but I had met Iain, Antony and Steve who were older than me and had been skating before the Tony Hawk games made skateboarding popular so I continued to skate with them. We travelled quite a bit up north to places like Bones in Bolton and Stockport. It was usually just us four going places and skating Barrow every night and occasionally meeting up with skaters in other parts of Cumbria. We just went out because there was nothing else that was fun to do.

Would you say the lack of ‘real spots’/’real scene’ lead you to skate as quirky as you do?

I don’t understand what a real spot or real scene is!

Everybody has influences in the way they skate, what gets you excited to go out and shred?

My friends! There’s nothing better than skating with your friends as you all push yourself. Seeing my friends do something rad gets me stoked, so they’re my real influences. 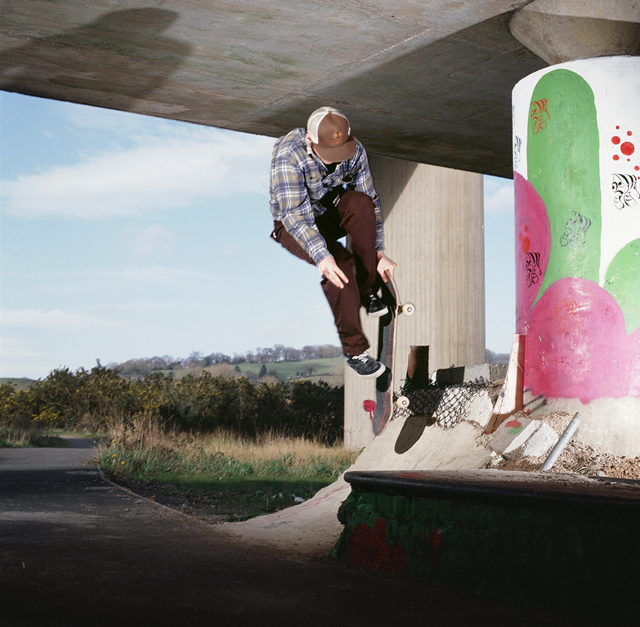 Your heavy influence from Japanese skating has lead you to go skate there, how many times have you been now?

I’ve managed to get to Japan three times.

Would you say the skate scene is totally different there, and if so, how?

I would say the skate scene there is certainly unique. They have a lot of crazy spots that just breeds very different skateboarders. They all have such a positive attitude towards skateboarding too. 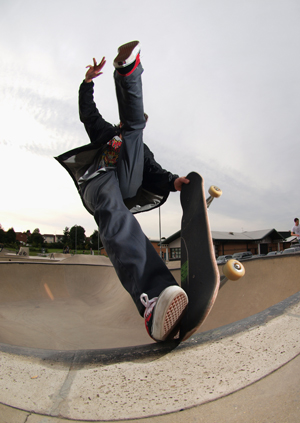 A few people may have heard the story of you vs Phelps and TNT before but for the people who haven’t, what happened?

Haha. Basically I was in Osaka and I was very drunk. Later that evening we were going to go watch Phelps and Trujillo’s band Bad Shit at a club somewhere downtown. When we got there they were outside so in my drunk state I tried to talk to them. Unfortunately they were both acting like utter knobs. Since I was drunk, I gave them a load of abuse and somewhere between dissing the current American economy and calling Trujillo a turd I punched Phelps in the chest. I think he hugged me after that and I got a photo with him. Later I managed to break into the VIP area, give them more abuse and pass out on the sofa only to be woken up by Trujillo’s girlfriend saying I was about to miss the best gig ever, whilst being handed a t-shirt!

As a well known member of the ‘I attend every event’ club what makes you go to all of them?

Its usually a good place to see friends I haven’t seen in ages and the atmosphere is usually pretty good. I haven’t been to as many this year because I had to pay my Uni fees which sucked!

Living in the Midlands over the past 3 years you will have seen a lot of parks popping up here there and everywhere. How do you feel about this and you got any favourites?

Obviously it’s a good thing, although I’m still waiting for Cov council to realise how important it is for them to build a much more modern park!

Out of all the parks I think Wolverhampton’s Wednesfield plaza is one of my favourites that I’ve been too.

You’ve been known to pad up and skate vert in the past, any plans for a 900 followed by a computer game coming up?

Only if I can have Jef Hartsel and Tim Jackson as playable characters. If you do 100 slappies you could unlock Blender.

Seeing as how we started let’s end this with stereotypical ending. Anybody out there you’d like to thank?

Yeah! First shout outs go to everybody I’ve ever had a skate with! I’d like to thank Iain, Antony and Ste for keeping me skating in Barrow. All the mates I’ve made in Coventry and around the midlands especially Mark ‘Frocker’ Hewitt, Daryl, Burrell, Ade, Slasher Sam, The Hell Crew, Gnargore and the rest. All the lads in Bristol, Bob, The Plews, 80’s street legend Habgood. Scalamere and the Haunting crew, Jim and all at Ride skateshop, Anne Marie, Powley. Rogie. Tyreman. Devo. Frost and Icky. Questions. Zorlac and the Death team. Tsuyoshi and the Felem Pirates. Fos, The Osaka daggers and everybody I probably forgot! Anybody who has basically given me a floor to sleep on, a cup to drink tea from or was just generally up for the shred! Ok I’m going to go skate …

Watch below for a short, sharp edit of Joxa radness courtesy of Andy Rayner.