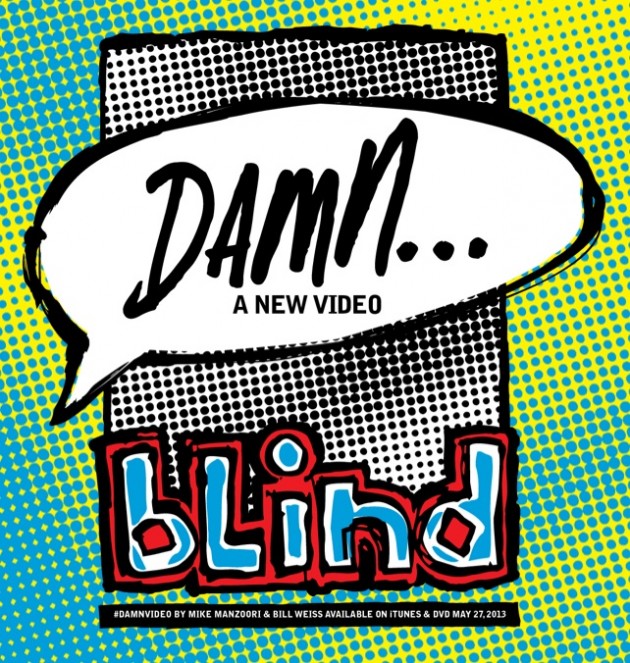 The new Blind Skateboards video ‘DAMN’ is about to drop into your local skater owned shop on the 27th May. With full parts planned from their new look team alongside seasoned pro’s such as the legendary Ronnie Creager, this is looking likely to be a video needing some attention on release day. Following a great reaction from the US premiere, Bill Weiss, who has worked on this movie alongside UK film maker Mike Manzoori, has answered 10 questions on ‘DAMN’ alongside a brand new trailer. Get to know:

1. How long did you spend filming this video (not long since the last one)

It was 2 years and 2 and a half months total filming time for this one. But that was pretty much every day-non stop

2. Was filming it mostly SD / Vx1000 camera a conscious decision or just a practical one

I had both a VX1000 and an HD Canon rig so I would let the guys make the call. Almost all of them wanted VX1000 so whatever they wanted. But as long as a trick is good were putting it in if it¹s VX, HD whatever.

3. Where was it all filmed?

4. Best and worst things that happened during filming?

The best thing that happened was being there when the guys roll away from the tricks that they worked so hard to get. Nothing is better than that.

The worst things was having to take the guys to the ER for injuries that happened during the shooting of the video.TJ had to get head staples, Filipe Ortiz broke his foot twice.

5. How would you describe the vibe of the video?

The vibe of the video is about pushing skating forward, fun and hustling in the street to make that happen. Shout out to everyone else out there pushing it and making videos happen. A lot of blood sweat and tears go into making these.

6. Is there gonna be something like a B sides / out takes series for web?

We have all sorts of stuff planned for the web as well as remix’s down the line.

7. Biggest challenge in making the video?

Biggest challenge in making this video is the standard of skating these wanted for their parts. It’s absolutely fucked when you first discuss some of the stuff they want to go out and try to get and then through all the craziness seeing it happen blows me away.

8. Why are full length DVDs still so important to skateboarding?

Full length videos are important to skateboarding because they are timeless testament to a team’s hard work all brought together for the world to enjoy. You get to go inside their world and see all the different perspectives and takes on skateboarding. They are a true bonding experience as the team go through so much shit together to make the parts happen. Everyone’s pushing each other and feeding off that energy. You cannot get the same feeling from a single web part that you get from seeing a full length team video.

9. Who’s in the video and is there any surprises to look forward to?

The video is Kevin Romar, Ronnie Creager, new Blind AM Yuri, New Blind Pro Cody McEntire, Morgan Smith, Tj Rogers, SEWA and Blind’s new Rookie Pro Filipe Ortiz. As far as surprises the video is packed full of them. I think people are gonna be really surprised on all crazy tricks in the video.

The future for Blind is very much like the name of the video. I hope people watch it and say Damn… that was fucking rad or Damn those dudes are having a good time out there. We are also putting so much into the new graphics and the team is loving the new stuff. Nothing is cooler than seeing the guys check out the new decks and saying Damn that looks sick!