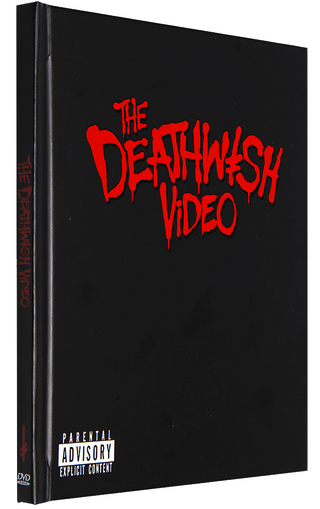 With the amount of independent skate videos being released in abundance, it keeps the internet stocked with clips from all over, but also adds pressure to the established companies producing vids. Following the amount of pre-hype attached to ‘Pretty Sweet’, they almost set the standard too high, and dare I say focused more on the equipment used, creating a pretty um-relateable, practically unreal video in my opinion.

Obviously skate videos evolve, but if you compare ‘Mouse’ to ‘Pretty Sweet’, it’s a bit of a shock, however if you compare Baker’s latest release to Baker 2G, you can still see core similarities, and that is one of the things I appreciate most about the Deathwish video. People can imitate and attempt to recreate this style of video, but these boys have got it dialed with an incredible balance of gnarly tricks, to the extreme hi-jinx captured on the streets.

The full feature is just shy of 50 minutes, and as the team name suggests they all seek danger to the highest degree! Lizard King opens the shred fest, raising suspicions of bionic knees, still being able to drop off the world like nobody’s business with absolutely no fucks given! Speed and quirkiness are probably the 2 main tags I’d give this, firecrackers and sheer energy bursting out the screen, Mike Plum kills!

Furby steezes you into a stupor with his incredible catch and switch competence. You know he keeps it G with the song choice as well. Even when dropping from the stratosphere, Furby still deems it necessary to pop ridiculously high, what a mad bastard he is! I’m also stoked to see a few tricks from Antwuan fucking Dixon in this, even if it does leave you wanting more from the man who is 90% weed, 40’s and tats.

Double E, Erik Ellington has been on the scene for years inspiring numerous generations, and still busts out a quality par. He indulges a variety pack of tricks including the lesser-seen pressure flip, but you know he’s still got one of the finest back-biggies in the game. His ender is pretty fucking out there as a result!

Eugene Williams, oh shiiiit! I’d like to know if Neen partook in any martial arts as a youth; varial heel whilst booting Europe, insane steez! It might be a good PR stunt to write messages on the soles of his shoes, they’d get a fuck load of exposure! Also the skating itself is incredible, what did you expect? Watch these extras that were just releasd overnight. Yes, this didn’t make the cut.

Moose, what a nickname- but having said that, pretty much every Deathwish rider has a dope nickname. Anyway Moose is a beast. A powerful skateboarder who you wouldn’t expect to be nearly as tech at ledge dancing as he is, take that pre-conceptions you shit! He gets fucking gnar-buckets on some beef-tacular rails as well, all to a tight Bowie track. Next up is the friend’s montage which is obviously incredible, featuring an array of their homies with a variety of stunts. The trick that stands out the most is an early grab back 50 on Hollywood high, it is fucked!

Slash is by far my favourite Hells Angel look-a-like, killing it in front of and behind the lens, he seems a top fucking bloke. Dog BGP’s lines across main roads and an ender that will make you scream for at least an hour! 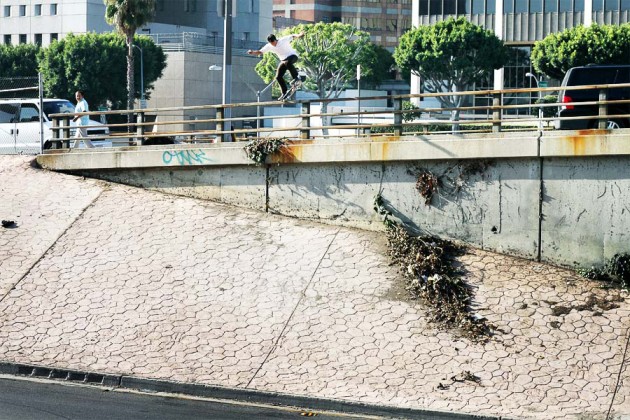 Jim Greco (featured above 5050 to bank drop) definitely has a loyalty card at B&Q with the amount of hammers he drops in this part. Anyone who chatted shit on him the past few years needs to watch this part and start licking his arse metaphorically or otherwise. Fastplants on the moon and getting into darkslides with some ‘unbeleeeeivable tekkers!’ So stoked on this part, watch it below for proof. Slayer was his choice of soundtrack, it could have not be anyone else. Once you finish reading this, see where Greco and Slayer managed to poll in the Top 10 Slayer video parts of all time.

Jon Dickson’s a true beast, if anything he’s the least exposed out of the Deathwish lot, through no fault of his own or who he represents. However, this part does him complete justice. He’s one of the gnarliest dudes out there and the lamb chops fully work for him. All round praise is deserved for this ender.

There’s another 15 minutes of unused footage to see you to the end of the video, which is always nice to ease out of an exhaustingly stupendous feature. With Deathwish cameos in Baker productions, and Baker cameos in Deathwish videos, you know these guys are tight and have owned iconic spots such as Hollywood high for well over a decade. Something I admire about these boys is that they obviously hang out with each other and their friendship is imperative to the team and overall success. Another thing I admire is that were clearly fully worked skating and filming for this video. No fresh linen on a clean street league course shit here!

Appreciate the ‘Warriors’ style font and the inimitable skating, rad soundtrack and a crew down for each other and the cause. I’m fully stoked on this video, which should be compulsory for your collection. Look out for the all singing, all dancing deluxe edition in your local skate shop.