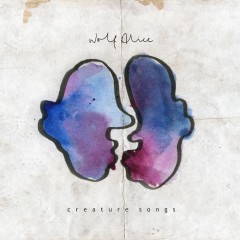 Having cut their teeth on a number of releases during 2013 – singles ‘Bros’ and ‘Fluffy’ during the early part of the year, followed by the Blush EP in the second half – Wolf Alice are beginning to flash their sharp canines on Creature Songs. If their early material shows a band going through a stage of adolescence, then this is a huge step into adulthood, showing maturity and commitment far beyond anything we’ve already seen from the London quartet.

First track ‘Moaning Lisa Smile’ is a decoy opener for the EP – a few seconds of humble strumming suddenly jumps feet-first into guitar-upon-guitar scuzz. Relying on the quiet/loud dynamic practised by former grunge champions, it’s an unrelenting, three-chord grind. Follower ‘Storms’ is a similar beast, but with more bite – bottled-up verses ramp into wide-open choruses when the tension boils over. The hypnotic refrains of both cuts are vicious rallying-cries, with singer Ellie Roswell’s demure vocals gaining just enough grit to encourage an audience to yell alongside her (at least if their recent Glastonbury show is anything to go by).

Although the second half reins things in somewhat, it retains a quiet intensity that stops it from falling into the shadow of part one. In ‘Heavenly Creatures’, the almost-whispered “time to die / time to kill … all for love / all for you” hides a dark, ritualistic edge, with the sickly “was it never enough that we should simply want to be together?” excusing the acts of evil that may (or may not be) hinted at within the lyrics. ‘We’re Not the Same’ seems almost reactionary at this point – a sarcasm-laced riposte to the rejection faced in ‘Heavenly Creatures’, drenched with reverb and brought to a punishing climax.

There is a great divide that runs through the centre of Creature Songs. The full-moon tilt of side one is feral and harrowing, while the second half remains delicate and serene; a dawn-breaker of a comedown. That’s no bad thing – neither half seems detached from the other, they’re just two ends of the same scale. With Wolf Alice’s highly anticipated debut LP tipped for a 2015 release, it will be interesting to see just how far the scale slides.