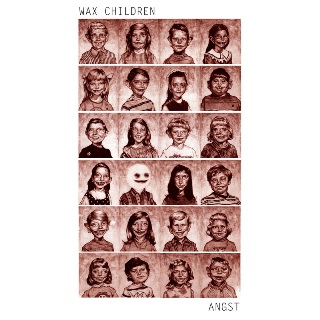 LA five piece Wax Children are primed, ready and willing to take you on a sonic journey with their latest album, Angst. A sonic sculpture carved from the finest psychedelic noise, it lures you in and winds deep down into the alcoves of your subconscious capacity. This record will leave you both addicted and vulnerable to the Wax Children’s shamanic sounds.

‘Aeons pt. 1’ provides a wailing introduction and sets the bar high for this eight-track album. Easing into ‘Wild Gloom’, you’re greeted by a dark ambience that shrouds the loosely strummed chords, sedating you to a dazed and confused state, with Mr Wall’s vocal melody entwining spectacularly with the swelling instrumental fuss, before cascading into acoustic reveries.

Third track ‘Binding The Bends’ harbours a heavily hypnotic hook; upbeat and topped by the creamiest guitar tone you’ve ever heard. The swirling coda builds edge of your seat tension before roping you back into the groove for one final burst of the infectious lead line. This track is arguably the highlight of the entire album and is sure to have you reaching for the replay button as soon as it reaches its dreamy climax.

‘Skin’ slows the pace down a gear to reflect on the past 5 onslaughts of psychedelia before ‘Awkward Strumming’ comes good with its quirky time signatures, creating a palpable tension, mixing melody with madness.

‘Aeons pt. 2’ brings the Wax Children’s epic musical quest to an end, and it really is the cherry on the rich, moist, sumptuous musical cake that this album has turned out to be. Luckily for you, Angst is available to download in its entirety for free, from their bandcamp.