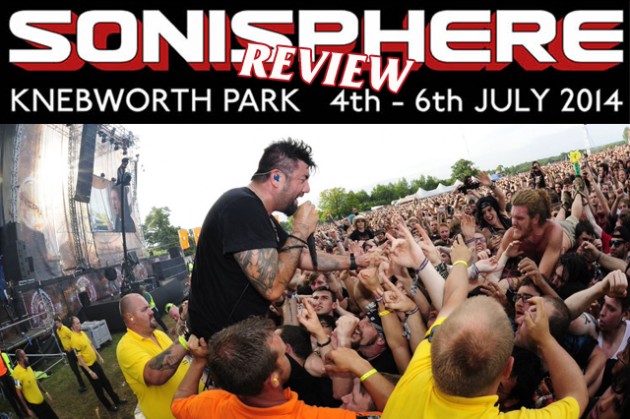 After 2 years of hibernation, Sonisphere has returned, and frankly, we’re relieved. Knebworth Park got loud again last weekend, and although this year’s line-up is short on genuine exclusives, there was plenty to get excited about. Alex Gosman went down to get the scoop.

We arrive on site just in time to catch COMEBACK KID kicking off on the Bohemia stage. The sound isn’t great, and the crowd really should be bigger, but the band give it their all and are at least rewarded with a decent pit. A brace of songs from recent album ‘Die Knowing’ sound super-powerful live, and old favourite ‘Wake The Dead’ is as good a set-closer as you’ll hear all weekend. 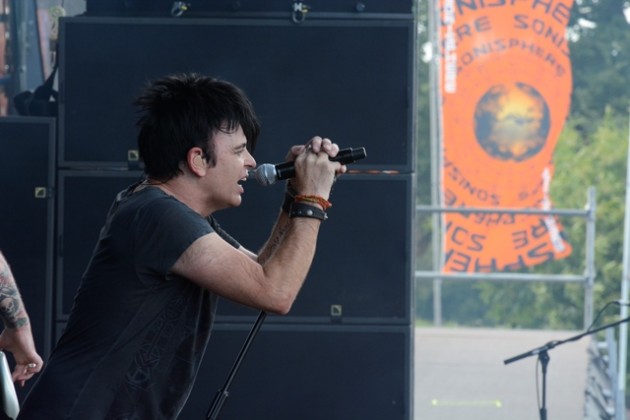 Over on the main Apollo stage, GARY NUMAN is exorcising a musical demon or two, but his twisted industrial/electro-rock seems ill-suited to such a beautiful day. The crowd sort of shuffle from side to side good-naturedly as they wait for ‘Cars’, and their patience is eventually rewarded. Not bad, but not as entertaining as the (possibly Scandinavian) oom-pah band covering ‘I Love Rock N’ Roll’ and Van Halen’s ‘Jump’ in the middle of the arena.

“I’m gonna bend my dick to my ass, so I can fuck myself!” roars Bam Margera, Jackass alumnus and frontman of FUCKFACE UNSTOPPABLE, over some wobbly dubstep beats. As you’ve probably guessed, these guys aren’t exactly Fugazi, but if you check your brain at the door, there’s plenty of idiotic fun to be had. For the most part this is gormless party rock, with plenty of clunky rapping and a cover of Turbonegro’s ‘All My Friends Are Dead’ thrown in for good measure. Shame they finished early, though. 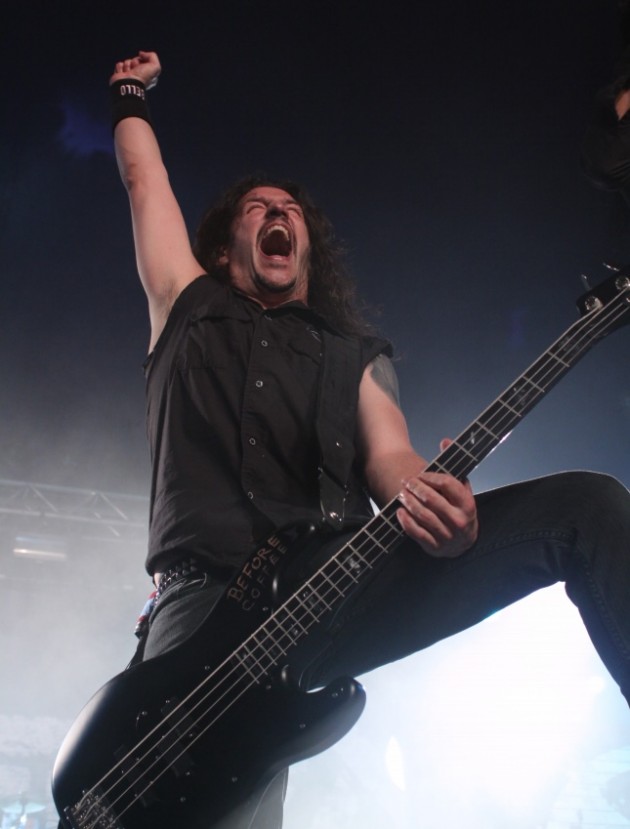 Friday’s real treat, though, comes courtesy of the veterans; the prospect of ANTHRAX playing their seminal Among The Living album in its entirety within the confines of the Bohemia tent. Unsurprisingly, the place is rammed, and for one hour we are in thrash metal heaven. For a bunch of middle aged guys, Joey Belladonna and co don’t half sound youthful, and every word of classics like ‘Caught In A Mosh’ and ‘I Am The Law’ are roared back at them by the entire tent – half of which seems caught in an almost constant circle pit. Limp Bizkit are on the main stage, but after a performance like this in such an intimate setting, we feel like the coolest kids in school.

After that, THE PRODIGY could have been an anti-climax, but thankfully Liam Howlett’s crew are also firing on all cylinders. Seemingly on a mission to drain the entirety of Hertfordshire’s electricity grid with their stage lighting and lasers, they detonate the likes of ‘Omen’ and ‘Voodoo People’ with scattergun brutal beats, as Keith and Maxim urge the crowd on to ever-greater efforts. Sonic agitators to the end, they clearly don’t (and shouldn’t) give a damn about their lack of ‘true metal’ credentials, and as that beast of a riff cuts in halfway through ‘Their Law’, few present would deny that Sonisphere Friday has ended with one hell of a bang.

Saturday morning comes, and we’re aching all over, mainly around the neck/upper back area (thanks, Anthrax!). You’d imagine that we’d be too fragile for the sludge metal mayhem of HANG THE BASTARD, but we brave them anyway, and leave feeling impressed that they can unleash such ferocity at this painfully early hour.

Maybe the ‘hair of the dog’ strategy is in order. That’s most likely what ALESTORM would recommend, and the Scots’ accordion-laden pirate metal shenanigans deservedly raise sing-alongs and huge grins from even curious bystanders. The similarly good-humoured CHAS & DAVE are something of a wild card on this bill, but they go down a treat, with the duo’s chirpy Cockney banter and ‘Ain’t No Pleasing You’ seemingly as welcome here as James Hetfield’s ‘Yeah-eah!’s and ‘Enter Sandman’. Oh, and they make the sun come out too. Cheers, guv’nors. 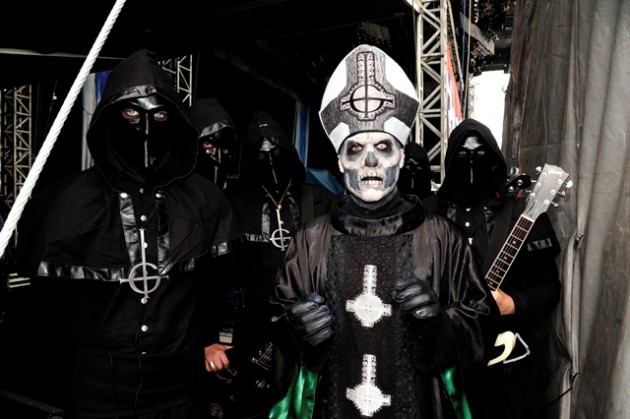 GHOST’s melodic odes to the horned geezer downstairs are the stuff of nightmares of US Bible Belt mothers, but even the most devout evangelist preacher would (secretly) admire vocalist Papa Emeritus’ ability to command crowds like he does today. This crowd grows steadily as bystanders are lured in by curiosity, and the “Come together…” refrain of ‘Monstrance Clock’ echoes long after the Swedes have left the stage.

And so to British hopes both present and past, in the form of FRANK TURNER & THE SLEEPING SOULS and HUNDRED REASONS. On paper, Frank and co’s spirited folk anthems may seem out of place at Sonisphere, but they’re greeted by a huge crowd that clap along and pump their fists at every turn. HUNDRED REASONS were originally due to play their debut album Ideas Above Our Station in its entirety at the cancelled Sonisphere 2012, and today they’re finally able to give it one last send off. Time has aged the band, but the likes of ‘I’ll Find You’ and ‘Silver’ still sound as great as ever, and remind us just how much they and their creators were loved.

For their first UK show since the sad death of guitarist Jeff Hanneman, SLAYER receive a hero’s welcome, and promptly get down to doing what Slayer do. The likes of ‘War Ensemble’, ‘Disciple’ and ‘Angel Of Death’ (this time accompanied by a touching backdrop tribute to Hanneman) are as essential as ever; Tom Araya’s between-song mumbling less so, and at times the Saturn Stage volume just doesn’t do them justice. Slayer still rock Sonisphere, but they don’t take it outside and kick the shit out of it like they did back in 2011. 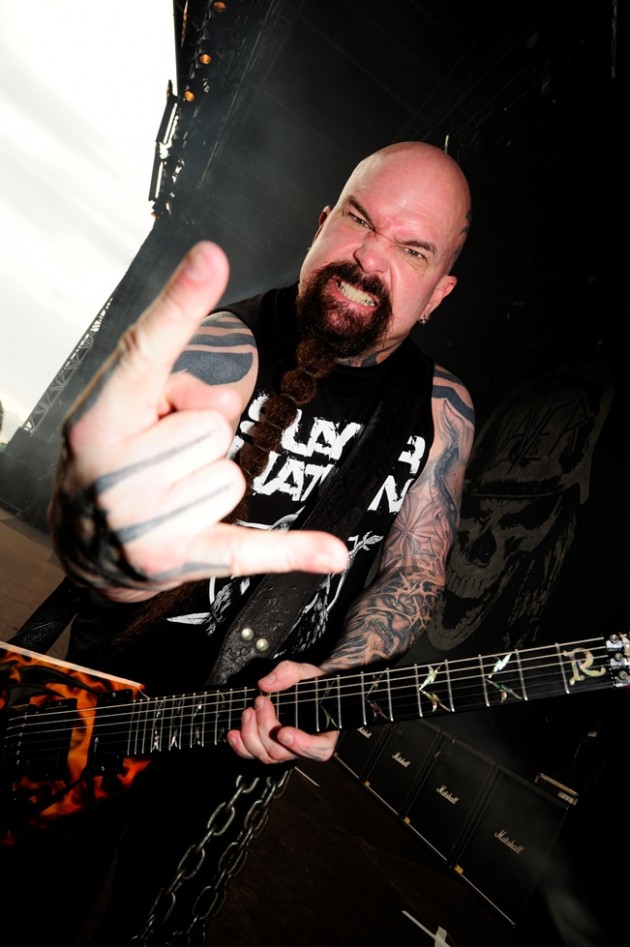 And so to IRON MAIDEN, whom we last saw at Donington Park in 2007, where they made the mistake of thinking a festival crowd would enjoy a set overly-dominated by cuts from then-recent album A Matter Of Life And Death. Thankfully, this time they front-load the set with classics, including a generous helping from Seventh Son of a Seventh Son, and the likes of ‘Run To The Hills’ and ‘The Trooper’ all present and correct. Things start to get a tad self-indulgent in the second half, but a slew of pyro and Eddie-related antics ensure that ‘Sanctuary’ ends the set triumphantly. At least half the folks present at Sonisphere are sporting Iron Maiden t-shirts, and tonight Steve Harris’ crew justify that devotion once again.

After a morning spent wandering around Stevenage town centre in search of hummus and a phone recharge, we return to the Sonisphere site to find that GOJIRA – like us – are half an hour late. All credit to the French quartet; they hit the stage running and blast any remaining cobwebs out of our heads with a short, sharp set of metallic fury. In contrast, PROTEST THE HERO’s widdly prog-metal acrobatics fail to convince, not least because the band themselves seem far from thrilled to be here. Full marks for vocalist Rody Walker’s ‘Lettuce Turnip The Beet’ vest, though. 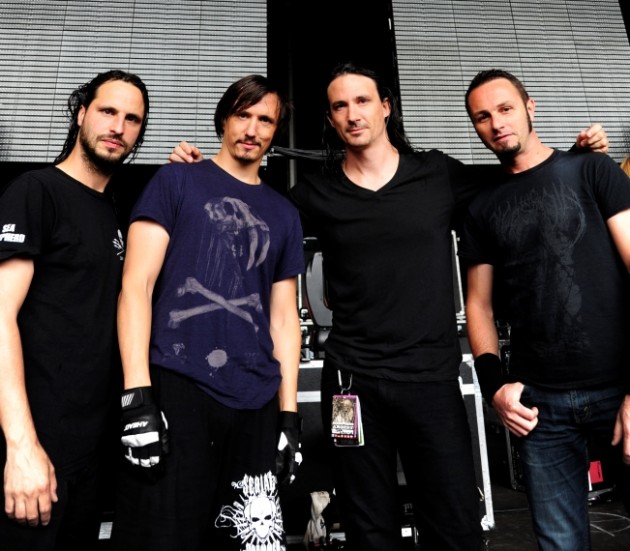 Now welcome, ladies and gentlemen, to the Laurent Barnard double bill. First he’s on the Jagermeister stage with KROKODIL, unleashing some deliciously filthy riff action to a deservedly packed tent. Next up, he’s helping his GALLOWS bandmates give the Bohemia tent security serious grief, as punter after punter tumbles over the barriers in accompaniment to a furious rendition of ‘Cross Of Lorraine’. The Watford crew are on typically vicious form, unleashing a couple of promising new songs too, and the increasingly packed tent is behind them all the way.

The sun is out in force, and who better to celebrate with than REEL BIG FISH? Technical gremlins threaten to sabotage the Californian ska/punks’ set, rendering ‘Where Have You Been’ audible only to the band themselves, but normal service is soon restored in time for a perky ‘Beer’. Even ever-sarcastic vocalist Aaron Barrett can’t help but look pleased as a sea of hands greets their closing cover of ‘Take On Me’.

MASTODON’S hulking desert rock riffs are impressive enough, but there are times during their set when you can’t help but wish they’d keep their muso tendencies on a tighter leash. When they get it right, though, they sound utterly seismic. Older cuts, and treats from new album ‘Once More Round The Sun’ go down a storm.

Back on the Saturn stage, the DROPKICK MURPHYS bring a touch of Celtic charm to proceedings, with the crowd going suitably nuts as Scruffy Wallace’s bagpipes wail over the likes of ‘The Boys Are Back’. Ken Casey and Al Barr may be getting a bit long in the tooth, but these seasoned road-dogs certainly know how to work a crowd, and the band’s rambunctious cover of AC/DC’s ‘Dirty Deeds Done Dirt Cheap’ is a smart, inclusive move.

Time now for one last visit to the Bohemia tent for one last album performance. This time courtesy of THERAPY? and ‘infernal Love’. Often overshadowed by its better-known and more acclaimed predecessor ‘Troublegum’, it’s a great record in its own right, and Andy Cairns and co do it fine justice tonight. ‘Stories’ and ‘Loose’ are their usual manic selves, whilst the more melancholic ‘A Moment Of Clarity’ and ‘Diane’ are lent a malevolent undercurrent in the live setting, to the delight of an almost-capacity crowd. Ever the great hosts, they even chuck in ‘Potato Junkie’ and ‘Screamager’ to ensure we all leave smiling.

METALLICA’s ‘By Request’ set is a good idea in theory; in practice, however, 90% of the tracks played tonight appear regularly in their set lists anyway. That said, few here are complaining as the San Francisco titans rip through a set that’s heavy on the classic 80s stuff, and mercifully light on anything post-1991. A couple of starstruck punters are dragged onstage to introduce ‘Sad But True’ and ‘Blackened’, and there’s a so-so new song ‘Lords Of Summer’, but that’s about it for surprises. Just another Metallica show, then, but that’s not really a problem when they’re on this form.

Sonisphere 2014, then; a lesson in how to bounce back in fine style. Same time next year, guys? Go on, you know you want to…