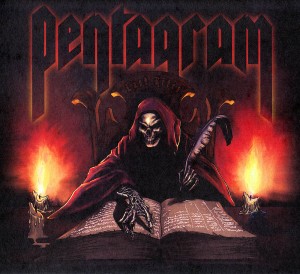 Be forewarned, for from the ashes, Pentagram has risen. Doom titans Bobby Liebling and Victor Griffin have finally reunited and again unleashed Pentagram’s classic 70’s doom thunder with Last Rites. Alongside bassist Greg Turley, who played with Pentagram in the 90’s, and drummer Tim Tomaselli of Griffin’s band Place of Skulls, Liebling and Griffin have managed to again set the wheels in motion towards reclaiming their rightful place on the altar of doom after almost two decades in shadows and turbulence.

The first track, Treat Me Right, stands strong as one hell of a launch pad for the album. Albeit with more production and thicker distortion than the likes of the reigning self-titled album—later reissued as Relentless—Griffin stays true and lures you from the get go with a familiar crushing wall of guts and gravel. He cuts out while you’re led by a quick drum build up only to lean straight back in, neck and neck with the classic, demanding, soulful voice of a now sober, crack-less Liebling. It’s definitely a loaded (re) introduction track; a proclamation of their resurrection and return from obscurity.

Call The Man, the second track, emerges with an eerie intro of bends and death clock bass drums, culminating in a march of very heavy, very 70’s doom riffage. The following track, Into The Ground, picks up right where the last left off, plowing on with surging bluesy doom shred.

For those of you who feared, as I did, that the new album would not retain Pentagram’s true form, or that it may not deliver, you can all rest easy. The album is solid, rich, and very well put together; an even balance between re-recorded songs and demos from the 70’s—Call The Man and Walk in Blue Light for example— and new material.
Tracks like 8, Everything’s Turning to Night, and American Dream drive home Griffin’s inherent musical depth and emotion as well as exhibiting a throatier, still flawless Liebling. Together they play with all the force and strength of the band’s golden years.

Each track—even, to some extent, the ballad Windmills and Chimes—continues to stand musically true to form, reeling off more of the Pentagram of old with a slightly more modern, or perhaps “cleaner” edge—if I can get away with that.

The albums Relentless and Be Forewarned will always reign in strength and style. But I take no issue with the newer, thick distortion and sound of Last Rites. It is a triumph.

One thought on “Pentagram”