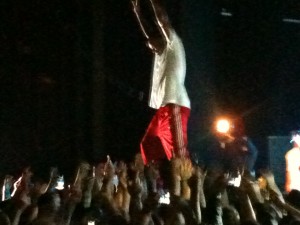 The line wasn’t huge when we hit up the Forum for the second of two Wu Tang dates in North London, but after a Semtex warm-up set, it was bubbling when Alabama’s Yelawolf took to the stage. It was never going to be easy for the MC to win over the whole crowd, as many of the staunch Wu fans are a world away from his quick-fire doubletime rhyme patterns, but to his credit he amped his energy levels almost as high as his solo show at XOYO the week before and certainly gained some new fans, especially when he jumped into the crowd for an impromptu pit. An undoubted talent, both on record and on stage.

So onto the Wu. Without RZA, Raekwon and Inspectah Deck, it was a depleted crew that took to the stage and, in truth, other than Method Man and Masta Killa, it was a fairly low-energy show from the majority of them. That being said, when Mef told the crowd that they would return any energy they got from the punters, the noise levels were extremely high.

Method Man is such a charismatic man that his fronting of the show made up for the relatively dull backdrop, and when he launched himself into the crowd, it came as no surprise to the delighted fans. Running through classics such as M.E.T.H.O.D. Man, Bring Da Ruckus, Clan In Da Front and the ever singable Wu Tang Clan Ain’t Nuthing Ta Fuck Wit, it was as live a crowd as you could ever hope for and when the ODB tribute part of the set arrived with Shimmy Shimmy Ya and Got Your Money, every single hand was in the air, the majority of which were held in the big W sign synonymous with the New York group.

Mixed in was a great little DJ set from Mathematics which included handcuffing his arms together and taking off his shoes [not at the same time] and Ghostface falling into a small anecdote about the strength of the pound, confusion from which was resolved when he declared that POUNDS Rule Everything Around Me, [P.R.E.A.M.] before Pretty Tony told everyone to follow him on Twitter, an order followed up by U-God.

It wasn’t the best Wu Tang show I’ve ever been to, but even with depleted numbers, they still have enough hits and hype to deliver a fun live set. Now let’s get in the Gravel Pit and have a dance.