Like our FB page for more of these interviews coming soon.

Photo: Taken on the rooftop of the Metal Hammer offices 1990 by Hannah Jordan. 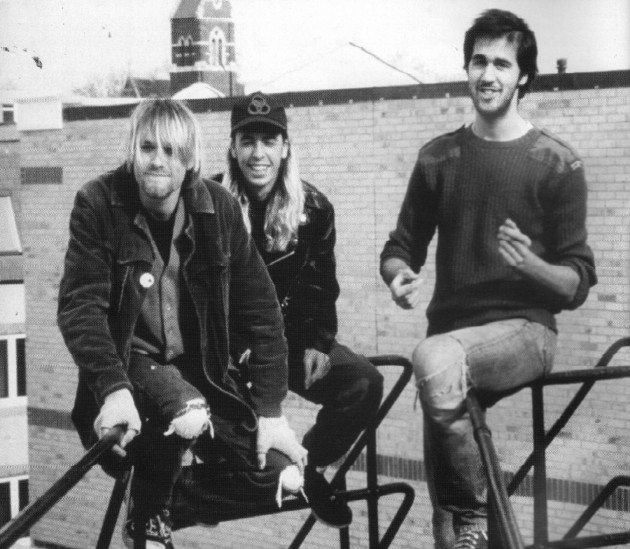 It’s hard to express quite how important Nirvana were to my life and the direction it took. In the late eighties I started my first job as office junior at Metal Hammer magazine. I had my own fanzine ‘Phobia’ and I was over-flowing with enthusiasm and eager for every bit of nasty noise that came my way; “you used to like everything….everything’s great,” an old work college reminded me recently. And he’s right, I loved it all.

In one of my first weeks in the office I happened upon a package of records that had been sent to the then reviews editor John Duke. He had recently left the magazine and I was charged with the job of sorting through the pile of records for review. One of the packages really caught my eye. It was from Anton at Bad Moon Publicity and had three records inside; ‘Superfuzz Bigmuff’ by Mudhoney, ‘Bleach’ by Nirvana and a Tad record which I now forget. I snuck the records home and suffice to say, they tore my little teenage mind apart. My record collection at this stage was crammed full of a motley collection of punk, hardcore, metal and classic sixties and seventies rock thieved from my father’s collection. These Sub Pop releases seemed to contain elements of all the music I liked. They were heavy, punk, melodic and so fresh and exciting. Nirvana and Mudhoney soon became my favourite bands.

Metal Hammer at the time was still very much in the big hair metal phase. Thanks to the lovely and hugely encouraging editor at the time, music journalist legend Chris Welch, I was allowed to write small articles and reviews on various underground bands, hidden amongst the Yngwie Malmsteen, Lisa Dominique and Skid Row posters and features. I soon built up a friendship with the aforementioned Anton and he secured me an interview with Nirvana on one of their early trips to the UK in November of 1990, here to promote their ‘Sliver’ single and to play at headline show at The Astoria, with L7 and Godflesh as support. I recall the band calling reception from the top of King Street in Hammersmith saying they were having problems finding the office. I walked up the road to meet them and vividly remember Krist Novoselic’s lanky frame lumbering down the road towards me with Kurt and Dave shuffling behind him. Once we got back to the office and I had made the band a round of tea, we settled down to talk – well at least Krist and Dave did. Kurt, however, sat on the end of the sofa rolling an un-lit cigarette I had given him between his fingers as he stared straight ahead. He had heavy eye-liner caked around his eyes and hunched himself on the end of the sofa, mumbling occasionally. Thankfully Krist and Dave proved to be easy guys to get along with and after the interview they hi-jacked my tape recorder and ran around the office interviewing various members of the staff. “So what do you do here?” questioned Dave, thrusting the Dictaphone into the surprised receptionists face.

Better still, I had tried to get the folks at Metal Hammer to book a photographer to shoot the band so I didn’t have to use a promo picture with the piece but none were available. The office H.R. woman at this point was an abrasive German woman called Hannah Jordan who was in her late fifties and had previously worked as a photographer for a European pop magazine in the seventies. She hadn’t shot a band for years but I asked her to bring her camera in and she kindly agreed and did a shoot with the band on the roof of our offices as I stood and watched. The band really came alive and goofed around for Hannah, amused by her quirky nature. She later sold the pics to an agency and made a bloody fortune. I constantly see them on unlicensed Nirvana merchandise. If I’d known how big the band were going to get I would have taken the bloody pictures myself! 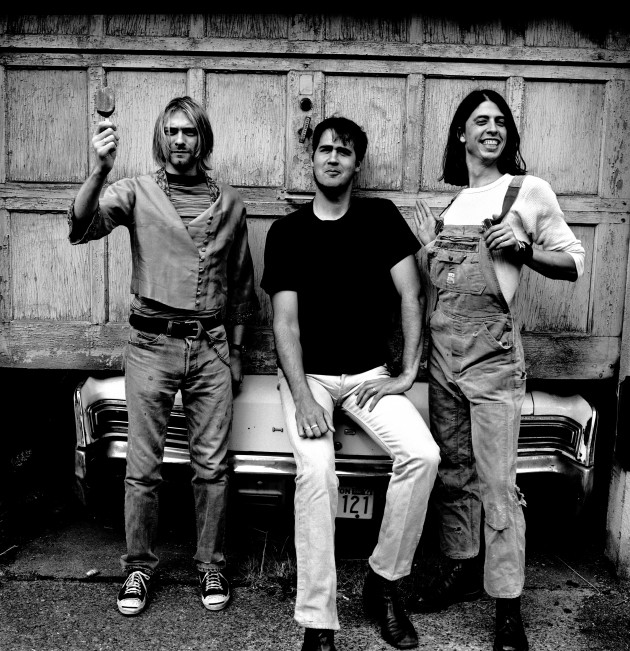 The second time our paths crossed was sometime in the summer of 1991 in the sunny back garden of our local pub boozer The Salutation in Hammersmith. The band had ‘Nevermind’ finished and were happy and excited about the future – a stark contrast to the paranoid confusion that engulfed the band after their success. At the time they knew they had an amazing record under wraps and couldn’t wait for people to hear it. Kurt was a different person to the one I first met in our previous interview. He was chatty, enthusiastic and excited to ‘maybe sell as many records as Sonic Youth’ with no clue as to the success that was about to engulf them on the records release. On the way back to the office I remember chatting to Kurt about music as we strolled along in the sun. He had a garish psychedelic Butthole Surfers shirt on and we talk about Gibby’s musical lunacy. (Gibby Haynes interview discussing Kurt in rehab here). I was wearing a Poison Idea shirt and we laughed about their thirst for excess on every scale and their punk-as-fuck attitude.

Once Nirvana exploded around the world, I didn’t get to interview them again, apart from a brief phone interview with Novoselic after they had won Metal Hammer’s ‘Best New Band’ award (he was a little bemused by this!) but the fact that the band had broken through to the traditional rock/metal crowd showed how things were changing. It was incredible to watch as ‘Nevermind’ took over the world and how it changed music and affected the band. The build up towards the release of ‘In Utero’ was equally exciting. The press was full of statements from Kurt about how they were going to make an album of total noise to commit commercial suicide and shake off the mainstream success and fans that they never wanted in the first place. When it was announced that Steve Albini was going to record it, the suits gulped. His reputation for being a punk-as-fuck difficult fucker was legendary and it really did seem likely that Nirvana were going to smash their success to bits with a wall of total noise.

As it turned out, that isn’t quite what happened. I can clearly remember hearing ‘In Utero’ for the first time. By this point the Metal Hammer office had moved to Putney and a good friend of mine, who was also a huge fan of the band, lived down the road from the office. The tape arrived in the morning and I held off playing it in the office and took it over to my friend’s house at lunchtime. We cranked it up on his stereo and were instantly floored by the production and how insanely heavy Grohl’s drumming sounded – it totally blew us away, so excited by it as we leap around his front room in a frenzy of air guitar and drums. And as we got our heads into the record it just got better and better. The sheer honesty of the lyrics, that opening line. Even now when I hear opening song ‘Serve The Servants’ and the verse about Kurt’s dad “I just want you to know that I don’t hate you anymore,” still sends shivers down my spine. 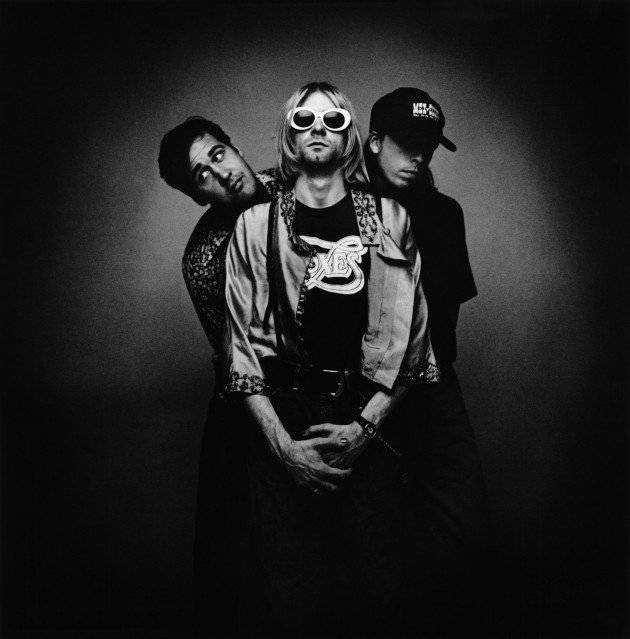 In Utero is an incredible album and it fully deserves the recognition and reissue treatment it is getting now. At the time, as Kurt’s depression and drug dependency became more apparent it was becoming clear the journey might not last long but nothing could have prepared us for how it was going to end. When the news came through of Kurt’s death I was in a studio with a band I was playing drums in and we were obviously stunned. We spent the afternoon jamming Nirvana songs. We were all so shocked. Empty. It was such a violent, brutal end to an incredibly exciting journey and they will always be the most important band of my youth. Once you peel away the bullshit, the drugs, the media attention and the eventual tragic suicide, all you’re left with is the music and 20 years later, it still resonates as powerfully and dramatically as it did big then. God bless Nirvana.

Enjoy these original interview dictaphone recordings (cleaned up by Jody Sherry) that were released on CD back in 2004. Today, these have been officially released to the internet by James Sherry for the first time and the first in a series of original interviews from the 90s that we will unleash this winter.

In Utero has been re-issued this month in a dope new boxset. Find it, treasure it and reminisce one of the greatest bands to ever entertain us.

British journalist James Sherry (then 21 years of age) interviews Nirvana the summer before Nevermind was released. This discussion took place to in a pub called the Salutation on King Street in Hammersmith, London in 1991.

Krist Novoselic is interviewed on the phone in James Sherry’s suburban family home in Surrey, England to discuss the mammoth success of Nevermind and the new found fame that came with a platinum selling record.

This interview recorded at the Metal Hammer offices may be the hardest to hear audio wise but was recorded post Bleach era (November 1990) after Dave Grohl had joined the band. Nirvana are in top form and steal James’s dictaphone at the end to interview people in the office.

Like our FB page for our Courtney Love interview coming soon.