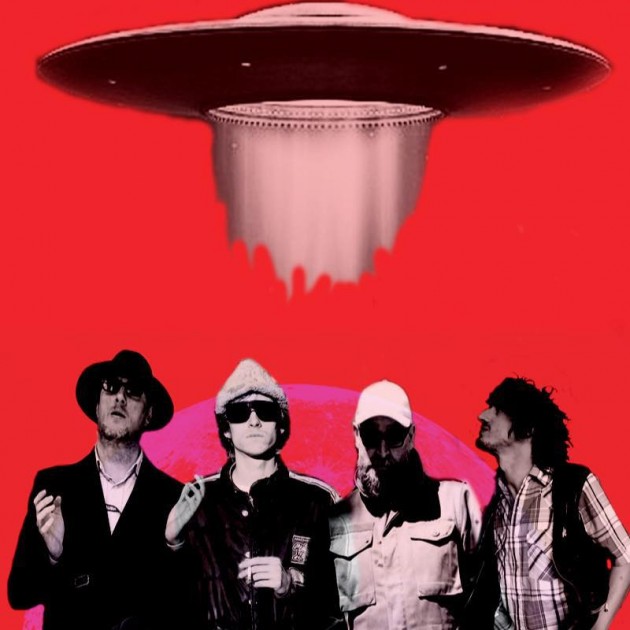 If the news of The Fat White Family’s forthcoming second LP wasn’t enough to make your pupils pop, two fresh tracks and details of a debut album from The Moonlandingz surely will.

But that’s not even the whole of it. Those in the US will be treated to an extended version of The Moonlandingz‘ late self-titled EP with two bonus tracks, ‘Psych Ersatz’ and the instrumental ‘Blow Football with J Carpenter’, and a ‘Sweet Saturn Mine’ Sean Lennon de-mix. And it’s out today available to buy here!

Whilst over in the US on their first North American tour earlier in October, the band pro-longed their stay to record and album and a half’s worth of material, also with Sean Lennon, at his studio in upstate New York. ERC/Moonlandingz main man Adrian Flanagan spills the beans below –

“We’ve got 17 tracks recorded, enough for an album and maybe a follow up EP. So far, it’s sounding incredible, there’s a lot of different genres on there: deranged glam rock songs about self discovery in foreign countries, east European electronic rockabilly about the fuckers who run our country in the UK, truck driving songs about prostitute killers, there’s a track called “The Rabies are Back” that sounds a bit like vintage Devo, there’s sensual ballads about strangling your lover, a track about indie rock stars acting like pricks called “Drop It Fauntleroy (The Ballad of A.Turner)” and this massive heavy psychedelic Bollywood type track. Yeah it’s gonna knock some socks off, might have a few guests on it too, just got to mix it all first before we plan a release date. I’m guessing late summer for the album, maybe a single in the interim.

Working with Sean was great, he really put the hours in and has contributed to a lot of the tracks on the record, playing musical saw, glass harps, Victorian funfair organs, banjo’s, sitars and lapsteel guitar, he’s practically a member of the group. Musically, he’s on the same wave length as us and he’s a funny fucker, he spent the early hours of one morning, post recording, reciting the lyrics to the Osmonds track “Crazy Horses” to us, he could not believe that such mind blowing lyrics existed in popular music, have you read them though? Utter POPPYCOCK!!!!”