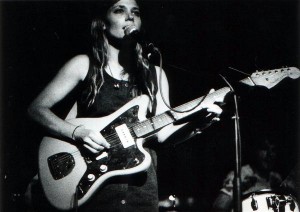 In addition to the brilliant news that Marnie Stern will be taking her fiddly guitar shredding live show to the UK in November, it has been announced that she will be performing two London dates.

Her forthcoming self-titled album is the third full-length studio release to come from the DIY technoise songwriter, and is due on October 18th through Souterrain Transmissions. Download a cut from the new album ‘For Ash‘ after the tour dates.