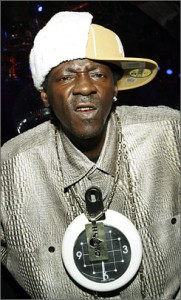 Flavor Flav will not have his name attached for a Fried Chicken restaurant any more.

In a move which will no doubt break hearts of millions around the world, the Public Enemy hype man will now not be lending his name to the Iowan Flav’s Fried Chicken, which opened four months ago. Reports of unpaid staff meant the restaurant was under the microscope from the off, though Nick Cimino, the co-founder, claimed it was due to a “credit card glitch”.

Flav won’t be out of the food game for long though as he plans to open Flavor Flav’s House Of Flavor in Vegas, saying that Cimino wasn’t running the business currently, though Cimino said “I’m just glad I’m free of somebody like Flavor Flav”.

At least Flav won’t have trouble getting to work on time, right?