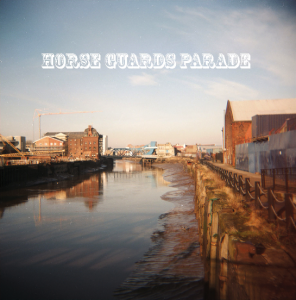 Once in a while an album drops into your stereo and on first listen hits a chord that makes you reminisce the good times. Yorkshire 5-piece Horse Guards Parade are the latest to take us back with their unique blend of mellow, indie rock that comes complete with charming song writing and intelligent lyrical content – in fact the more you listen to this debut, the more guiarist/vocalist James Waudby’s stories spark that imaginition you had forgotten existed due to the dull tones of the many artists that fill your i-pod these days.

With a sound that could be mentioned in the same breathe as Neil Young and Pavement (who they have played shows with at ATP) their Northern take on 90’s inspired indie rock should make a decent dent on the indie scene in 2011 so look out for a release on April 11th on Morten Industries and like their page on Facebook.

Saturday February 5th 2011 at Fruit in Hull playing an acoustic set as support for a spoken word show by the former international drug dealer Howard Marks.