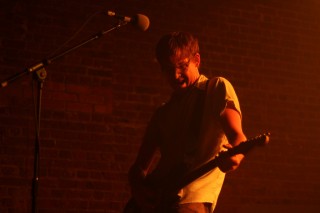 Stepping into the cavernous realm of Village Underground there’s a real buzz in the air, and no wonder – the three bands playing tonight make for a top notch bill. What better way for two freshly squeezed bands to cut their teeth on the tour circuit than to hit the road with METZ? Playing shows together across Europe for the entirety of November, tonight brings this epic musical relay to a close.

The Wytches kick things off with their dark garage tones. Straight into a psych scare, building shimmering riffs up to fully fuzzed out noise with all the crashing drums and shrieking howls you like. ‘Robe For Juda’ confirms how on point this three piece are. It sounds massive.

Baton passed, contemporary shoegazers Cheatahs jump on stage, rattling off numbers recognisable from the Coared and SANS EP’s. Harnessing momentous, driving rhythms fused with a guitar sound only describable as the duelling banjos of grunge, they are rocking. Cheatahs most recent singles are showcased tonight too, with October double-A-side ‘Cut The Grass’ / ‘Kenworth’ proving instant crowd pleasing material. Despite their complexly distorted sound not being perfect in this air craft hanger-like venue, set closer and arguably strongest song to date, ‘The Swan’, still soars.

Steaming straight into ‘Dirty Shirt’, frontman Alex Edkins emits a vivacious energy that self-multiplies with every song tonight. It’s very hard to pick a favourite of the set METZ play, each song is delivered with even more balls than the last. ‘Negative space’, ‘Wasted’ and ‘Sad Pricks’ all kick the shit out of each other.

If there’s one thing to be said about METZ it’s that they’re fucking loud. This Toronto trio know no boundaries when it comes to making a racket. The aural uproar they generate tonight is so deafeningly good it makes you want to hurl yourself into the PA and shatter into a thousand pieces.

METZ are essentially a one trick pony, but fast paced, thunderous hardcore is exactly what you want from a show isn’t it? Of course it is! And no one does it better than these three. Touring their eponymous debut relentlessly ever since its release in 2012 their live show is utterly destroying.

Closing with ‘Wet Blanket’ and a wall of coma inducing feedback, its clear METZ do nothing by half. It’s either full throttle or go back to sleep. I’m deafened, and I can’t wait until they return to London.