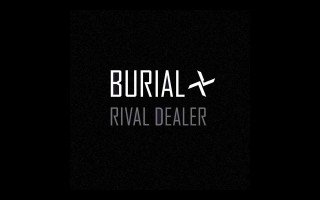 The ever-elusive Burial made a typical return to the forefront of electronic music this week by sticking his new EP Rival Dealer online to buy and stream with minimal fanfare. Three tracks, clocking in at about half an hour, Rival Dealer is perhaps the most significant release from the producer since the seminal Untrue.

Many of Burial’s calling cards are ever present – there’s the vinyls scratches, the throbbing basslines and distressed vocal loops, but the first five minutes of the EP signify that Burial is not willing to rest on his trademarks, opting for his own version of an instantly accessible track – a percussive, relenting and intense few minutes and perhaps the most ‘dancey’ Burial has ever sounded. Of course, that doesn’t last long and the song mutates into a longing, swirling soundscape before ushering in the second track ‘Hiders’ – a hopeful, optimistic track which gives a refreshingly large amount of much space for each nuance to breathe and reveal itself.

There’s a narrative throughout the three tracks which is perhaps more blatant than his previous output. Moving away from tales of the streets, Rival Dealer looks inside itself with messages of sexuality and identity – none more blatant than sampling a moving speech from transgender filmmaker Lana Wachowski after receiving last year’s Human Rights Visibility Award on ‘Come Down To Us’.

This is perhaps the most emotional that Burial has ever sounded. Final track ‘Come Down To Us’ instantly pulls at the heart-strings with its floating melody and slow motion groove. In three tracks, Burial proves why he is held in the same lofty regard as the likes Boards of Canada or Aphex Twin. Despite knowing little about Burial himself, it’s easy to assume that we’ll be able to predict his output but here on just three-track, he has continued to surprise and excited whilst making a serious statement of progression.