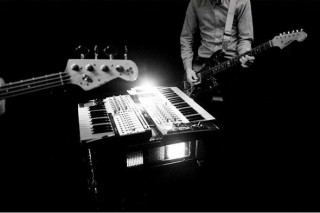 A strict rule applies this evening: No bands allowed containing more than two human beings, with a minimum of one robot per band. Jiboia makes no exception to this. Flying solo, piloting a table crammed with more gadgets and gizmos than you can shake a stick at. He climbs to a high sonic altitude, looping and layering his way through the set. After fifteen minutes of electronic play he busts out the guitar and spills some Zappa style riffs all over his percussive drones. At times I’m a bit lost in these layers, but just watching Jiboia rocking out in front of his Marshall stack, you can see how much he digs what he’s doing.

Civil Civic ascend the stage, teasing everyone with an extended intro to ‘It’s Krill’ before erupting into full throttle CC groove. There are no buts about it, this duo rock. Their live show is engaging and exciting, full of mean guitar and bass riffs that’ll shred your face clean off, balanced with true pop sensibilities.

When you listen to Rules –Civil Civic’s cracking 2011 debut album- you have a picture in your head of which instruments play particular melodies and hooks. Yet when you see their live show, witnessing the finest guitar, bass and synth ensemble tear it up before your very eyes, this picture is totally flip reversed. There are a lot of hooks and effects on Rules that sound as though they’re indefinitely made with a synthesiser, but in fact most of this wizardry is played on guitar. And some of the more intricate riffs you assume are played on guitar actually lead from the bass.

Listening to this debut post-gig you hear things in a totally different way, and that’s not a bad thing. Tonight, guitarist Aaron manipulates his strings with a finesse one can only attain through a teenage love of Moore and Ranaldo I’m sure. He makes his guitar squeal like a banshee whilst delivering sludgy riffs that sound even meaner than Ben’s boundless bass work.

Watching Civil Civic play you feel a grin unfolding across your face. Rocking around their electronic, cuboid band-mate turned light show, they’re a lot of fun to watch. Bassist Ben’s dance floor antics establish that above all, they’re here to have fun, and they want to have fun with you. Civil Civic aren’t a pair of clowns though, not by any means. The tunes they play tonight all hold the same sincerity and downright edgy cool that they do on record. Highlights come in the form of ‘Lights On A Leash’, a mean slow builder rising to an off the cuff breakdown of epic electronic proportions. ‘Street Trap’ and ‘Less Unless’ both prove instant winners too.

Despite a serious amount of string breakage suddenly occurring mid-way through crowd pleaser ‘Run Overdrive’, this lot aren’t phased. The re-stringing operation flys by as Aaron jumps on the keys for an impromptu synth interlude, then they’re back in the game for a triumphant encore.

With hints dropped of some new music to come from Civil Civic in the New Year, I am more than excited to see what this duo do next.