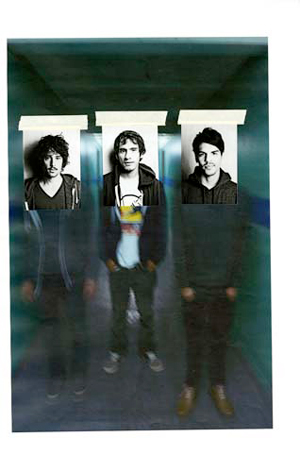 Los Angeles based three-piece Funeral Party emerged partly out of their own perpetual boredom of their tiresome and uninspired musical surroundings and partly because of their inherant post-punk-meets-dance-culture influence. Whilst gigging in backyard parties and groggy clubs across East LA suburbs they have manged to recall the true messiness of what makes dance punk actually is. Somewhere between not giving a fuck and the perfect soundtrack for basement club floors laced with beer-stained jeans and your mates’ blood-covered t-shirt.

Your name comes from a Cure track, right?

What drew you to this particular song when identifying yourselves as a band?

A girlfriend of mine was listening to ‘Funeral Party’ by the Cure and I asked what the song was called because it was the most depressing song I’d ever heard. She answered and it hit me: this is the perfect name for our band because it’s so bleak; it perfectly encapsulates the landscape that bore us.

So besides being in the same high school, what spurred you to start making music?

We all came to music in different ways. For me, it was like a drug, something I hid from my family because music wasn’t allowed in my house; my parents felt it was too worldly, and that made it sinful. I think the common the band find in music is that it was and is a way to escape the shitty town we’re from. We all see music as a form of escapism.

What would you all be doing if you weren’t in a band?

You’re all from LA and playing this music that isn’t typical of the west coast music scene. Did the whole dance punk vibe take a while to sink in with some of the crowds there?

Not really. Hard-core and Emo were the dominant milieus where we are from, and Post-Punk and ’77-’80 Punk were the natural backlash against the popular scenes in our area. It was natural to look to Joy Division or Television and Suicide, or contemporary underground bands we listened to as an alternative to Blood Brothers or Modest Mouse, but we really see music as a cohesive continuum, so we weren’t really consciously trying to be anything.

For us, it all started at a backyard party. I screamed “Liar!” at the audience because I didn’t know what else to do, and we started playing and people started moving. From that moment on we were just doing our thing, figuring ourselves out musically. We’re still doing that.

What’s the gnarliest encounter you’ve had at a gig so far?

The gnarliest encounter was probably when we were playing a party in East LA and a fight broke out and some guy got stabbed. It was total chaos, but we just kept playing. Finally, some woman started yelling at us in Spanish an we stopped playing. There was a lot of violence in our early days. It’s just what happens when people are drinking and going off. I’m sure we we have provided the soundtrack to many fights and have not been aware of it.

You all skate too, yeah? Would you be hyped if any of your tracks made it into a video?

Some of us skate, but we are all in touch with skateboarding. We would be excited to be in videos, but it depends on who used it, I guess. I’ve heard they play us on the PA at The Berrics. 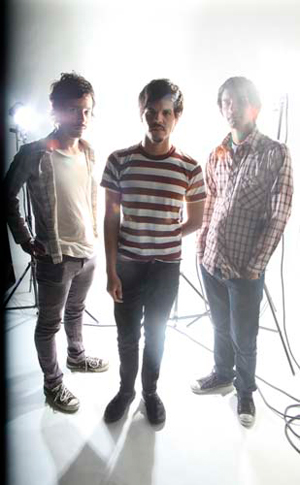 What kind of video would you be stoked on most if someone asked if they could use your music?

Like Toy Machine vibes, Static vibes, Baker vibes or Fully Flared vibes… Any of those would be rad. A lot of skaters come out to our shows and our music seems to have the right energy for skateboarding.

Who are your favourite skaters?

How does the how culture of skating influence your music?

Hard to say, but we all wear plaid.

‘Sometimes, You Gotta Make It Alone’ or ‘Give Yourself A Hand’

And if you were to compose the score, what would it sound like?

It would be comprised of Talking Heads cover songs.

What’s next for you guys now that people worldwide are really starting to get into your music?

Our album comes out in January, 2011 and we will continue touring the world.

Funeral Party’s new single ‘Just Because‘ is out now, check out the music video, directed by Mike Relm below alongside the stream for ‘Giants Song‘.