To All My Friends, Blood Makes The Blade Holy
Rhymesayers
www.myspace.com/atmosphere 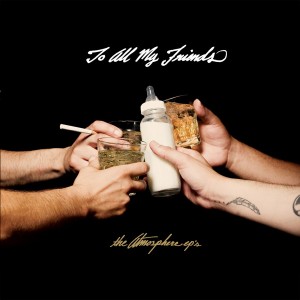 Using overly long names to title your releases can most definitely be a pomposity that puts people off listening to a band, but Atmosphere have managed to turn that highbrow nonsense into something so ridiculous, it’s great. To All My Friends, Blood Makes The Blade Holy means absolutely nothing, especially when put in the context the music, but then the last two albums from the Minnesotan duo were called When Life Gives You Lemons, You Paint That Shit Gold and You Can’t Imagine How Much Fun We’re Having, so what did you expect?

Title semantics aside, the music is brilliant. Basically put, it takes everything that’s fun in the duo’s Sad Clown series and some of the instrumentation of the last studio album [Lemons] and churns out 10 tracks that surpass most groups’ studio albums. Leading off with Until The Nipple’s Gone, whose seething intro crescendos  a swirling mass of sound for Slug to rap over before moving into more laid back territory with Scalp and The Major Leagues, Atmosphere lay their variety on the table.

The piano based The Best Day, a happy-go-lucky beat laid under lyrics about how crap jobs are takes things into more cheery [sounding at least] territory and Americareful has one of the most innovative Atmosphere beats in a long time. Ant’s production is definitely on point with the booming basslines of The Loser Wins which is reminiscent of Shoulda Known and some of the most far reaching in his catalogue with the almost Addams Family-esque Hope.

Slug’s cynical outlook on the need to constantly portray oneself as beautiful comes to the fore in Commodities, providing yet another example of his sharp tongue  before the EPs [technically this is a two disc job] finish up with an acoustic sound of Freefallin’ and To All My Friends, giving an idea of how their live sound has progressed their songwriting.

If this is how great they are for their EPs, imagine how incredible their next album will be!