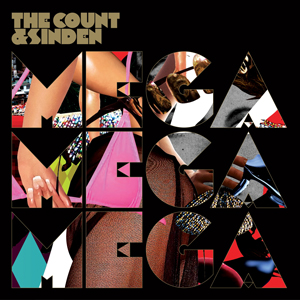 As separate producers, Hervé and Sinden have only danced around trends when the bandwagon booty shakes and wobbles its cumbersome way  into the fray of their own personal tastes. It just so happens that both Joshua Harvey (The Count/Hervé) and Graeme Sinden have a diverse selection of influences from sounds old, new and never-even-heard-before that simply work wonders in the ears of both music-lovers and relentless blog DJs alike.

The foreshadowing began when the hypegeist caught on to the visceral bass jam ‘Beeper‘: a fine enough introduction to provoke mass anticipation for a debut. Said debut is – on first listen – as varied as everyone hoped it would be. Furthermore, it’s very, very clever; not so much intelligent as naturally blooming with distinction, personal experience and inherited club knowledge.

Rather than following the roads signposted by the blogosphere, Count and Sinden very much lay their own, and opener Do You Really Want It fuzzes and bubbles out of shaking sub-woofers cements just that as Trackademicks boldly announces ‘It’s something that you know exists, but you’ve never really seen‘. Following is the ultimate pop cross-over After Dark that re-contextualises the twingly indie club sound into something bulging with tropical lukewarm euphoria, friendly for radio playlists and free parties alike.

The beats are constantly in the foreground, beginning with Mujava-inspired funk meets baltimore club in Desert Rhythm before descending a whippy yet seamless transition into a minimal kick snare beeper beeper SMD-style jam, Hardcore Girls. The track features Rye Rye snarling and glowing in between rolling pseudo-drops and more delicious bass. Katy B continues to confirm her reputation as female of the NOW. Rinse’s similarly underground to chart-stomping singer-songwriter gives the listener a little harmony before title-ish track ‘MEGA‘ absolutely saws its way through your ear drums. Crossfire’s beat-connoisseur Abjekt just declared that this (Mega) was the stand-out track. So it is settled.

A superb, thoroughly rewarding debut that’s as mega as the unequivocal title suggests.

Check out the video for ‘After Dark‘ below, and keep scrolling for remixes of the track including a free download from recent Crossfader subjects C.R.S.T. and more. Banging.

The Count & Sinden – After Dark (Remixes) by DominoRecordCo