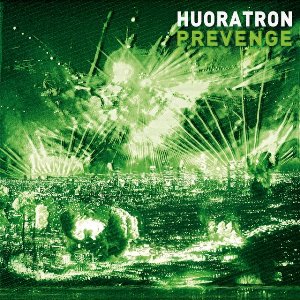 BOM BOM BOM BOM GZZZZZZ WEEEP WEEEP GZZZZZZZZ WEEP WEEP GZZZZZZ BZZZZZZ WZZZZ WAAAAP WAAAP BOM BOM BOM. Yeah, so that’s what this EP sounds like and considering Aku Raski, the big bearded beat bringer better known as Huoratron does not muck about with delaying the loud and messy drop then let’s not bother with pleasantries in the opening paragraph of this review. Hopefully you’ll agree that this record is so much of a sensory clusterfuck that you’ll forgive me for that unintentional gross overuse of alliteration in that last sentence.

It would be very easy to dismiss this record as nothing more than noise that just so happens to cause your eyes to squint and your arms to start pumping towards the sky a lot, which it does, but its influences are cleverly selected and crafted with precision and cultural capital. The Rollin’ & Scratchin’ inspired electronic punk euphoria is matched by timeless 90s house beats. You know the ones, those perfectly inserted hi-hats that Deadmau5 often relies upon to make those 10 minute progtronics seem a little shorter. Huoratron on the other hand blends the two sounds into something that doesn’t mess around, works independently without the need for clichéd build ups, it’s just instant POW POW WWWWWWWWWWWWWWWAAAAAAAZZZZZZZ.

Pick any song, they’re all as relentless as the last. Prevenge is an EP that summons your passion for music, whether it’s overwhelming love or punishing hatred, this record will at the very least make you feel something.

You can download gBay free from the Crossfire Soundcloud below or watch the gnarly video for Corporate Occult here.