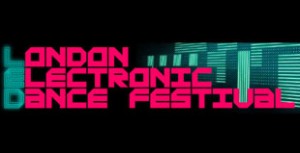 Though the cultural diversity of those attending the London Electronic Festival over the weekend was considerably wider than the polar-opposite crowds that flocked to the other two festivals taking place this busy bank holiday weekend past, it was evident that those present at the inaugural LED Festival could be split into two spheres like some sort of pretty neon-lit venn diagram. Those that came to have a great time with no intention of acknowledging any festival politics, and those who had come to stand-still and complain with a face that suggested they had more substances up their arse than the early 90s throwbacks who were busy tripping balls to Aphex Twin.

The negative reviews that have surfaced so far seem to be written by those who appeared bemused that they weren’t at London Stand-Still Festival whilst the overwhelming bass insisted otherwise. So rest assured, you can forget about the discussions of the rainy inception and foggy future of annual electronic dance festivals in rainy Hackney,  because this review won’t cover any of that. No politics, no eyebrow raises at the line-up. This review was written by someone who turned up to this festival expecting one thing, to dance like a mad twatter and embrace the sounds that bring humans closer together than any other thing in the world can, electronic dance music.

It should also be noted that certain acts were missed due to re-scheduling and other acts were missed because they’re obviously poops (I’m looking at you, David Guetta…) Here were the weekend’s best acts, interspliced with some wholesome home-made videos uploaded to the internet by fans. ‘Ave it democratic media.

2010 is THE year to see Zombie Nation, better known as the guy who did that one techno song non-techno fans bought, sadly lesser known as the MPC wizard Florian Senfter, a live phenomenon backed by bizarre visuals and a genuine sense of surprise. This live act sees the already improvised basslines in his free-thinking german electro soundscapes become totally reimagined into whatever context he feels like on the day. And as they waver in and out of meticulously controlled disco beats the crowd are treated to bizarre visuals and a constant supply of pure, bastardized groove. Forza sounded heavier than ever while his Tiga-assisted Lower State Of Consciousness gently flowed in and out when the crowd deemed it necessary. A reconstructed Worth It took Hackney on a lengthy trip through intense oscillation and an early peak before the drinks had a chance to kick in. 2010 is the year for Zombie Nation because not only are his live performances better than ever but just enough time has passed for Kernkraft 4000 to sound not just fucking great, but completely at home in a set of underrated anthems that push electronica further than whatever else is trending on the hype machine right now.

A strange rescheduling left Soulwax playing at a slightly more appropriate time than 5:45PM (which was not only too early for the sharply dressed Belgian techno punks but clashed with Zombie Nation, an unacceptable move). As the sky grew darker, and presumably as subtances legal or otherwise began to rise up inside, more people felt urges to dance and so they should for the Daewale brothers and co were on form as ever. Their set pulled in Nite Version classics along with newer remixes that you may not have heard on that CD with the longest name ever, including a stonking live cover of a weekend favourite and undisputable screw-facer from 2008, Raven by Proxy. It came from no where and became a hot topic on message boards before it even finished. Leaping from strength to strength, these guys embody modern techno.

Canadian DJ/vocalist/producer and the best friend of everyone in Europe, Tiga has been demanding attention lately with his notably more outspoken persona that shined on last year’s Ciao! and is currently adding a post-modern ego-centric irony to Chilly Gonzales’ a-ma-zing ‘Ivory Tower‘. For the increasingly rammed dance tent this bank holiday however he resumes the quiet hat-wearing, heavily concentrated house DJ persona that got him where he is, and this paid off. As the lights got brighter and the bodies got sweatier, Tiga’s exceptional grasp on electro-house and your own mind dimeshaaaan resulted in a glowing, neon-heavy set. Mind Dimension 2 kicked things off early with that shit-the-bed bassline still taking dancers that one step further, but it was the end of the set that saw the most peaks. As You Gonna Want Me saw London sing more loudly than they would to the essentially redundant Goldfrapp main stage flop later that weekend, the crowd were fired for a pulsating finish courtesy of an extended disco blitz in the form of Mr Oizo’s remix of Shoes. It’s not often that Hackney is filled with people screaming ‘SHOES SHOES SHOES SHOES SHOEEEESS SHOEEESSSS’ but it’s a rather pleasant place when it is.

Italy’s Bloody Beetroots are very much a love or hate group, but they deserved that headline slot (in the dance tent, because the main stage really wasn’t proving to be worth anyone’s time) more than anyone else playing today. As a full band (performing as the Death Crew 77) their harsh regenerated rave punk sound is taken to higher dimensions that a few filters on a mixer cannot necessarily obtain. Firstly, they have a live presence and whether you think it is necessary or not, does not stop it from being exciting. As they fluidly Soulwax their way (who else mixes live electronic songs so well) through instantly classic blog and student dorm hits like Dimmakmmunication and Warp, the night reached a peak as a slow keyboard rendition of John Murphy’s In A House In A Heartbeat (the theme to 28 Days Later, and the backbone to a certain incredible BB song) built up a sweaty crowd into the last screw face moment of the day, when Cornelius got dropped. Amazing. Sure, they’re not as cool as people would give them credit, but they’re headline material, and barrels of fun.

Saturday’s line-up was notably more UK-sound oriented, particularly London centric, with some European influence courtesy of Annie Mac’s whateverispopular playlist. The second day highlighted the pioneers of drum and bass, breakbeat, UK techno, acid house, grime and dubstep and to give the organisers credit, was a tremendous line-up, so long as you looked at it from the right angles. Beginning the day with Shy FX was a good start, as the producer who broke from the jungle he created into a more popular take on the amen breaks with T-Power chose today to relive the sounds that were prominent almost two decades ago. Who wants their fingers on the pulse anyway when the sounds of 94’s Original Nuttah are still booming with life? 138 Trek got dropped, The Lighter got dropped, everything a kid growing up with a clubbing family in the 90s wanted to hear got dropped. Sadly there have been no videos uploaded online yet but that’s likely due to everyone vibesing and not playing around with their stupid bloody phones.

Forget every other act playing this festival, the entire price of the weekend ticket was worth to see Aphex Twin play for 90 minutes. Having listened to and loved his music since I can remember, seeing him perform a set of acid house everything was exactly what I hoped for. It also marked the first time in my life I unintentionally tried to fuck a dance tent. As you can imagine, dance tents are huge and there are a lot of humans in the way so I was unsuccessful, but, following on from Annie Mac’s dubwub he proved that he could mess around with the LFO settings in the same way everyone in London is trying to do, but simultaneously flip open the heads of everyone around and fill it with inexplicable drum hits and proper, proper acidic euphoria, melting away your head. Even Die Antwoord’s fluffy animal wearing stage-bombs weren’t a problem when the music was this hard. I can’t even write about it further because stuff like this should be left as it is. Aphex Twin is simply someone you have to see at least once in your life if you like dance music. He has otherworldly powers.

As one of Leftfield’s return shows, their headline slot gave many people a reason (and for some, the only reason) to hit up the main stage during LED, with enough hype behind it to result in Aphex Twin closing down the tent early enough for people to see it. While I’m sure everyone would have been happy to hear another 90 minutes of AFX’s light-and-sound drum rush,  the promise of a live performance from the earliest musicians to fuse dub into their techno was acceptable enough. And they were, legit stadium techno heads with early forward-thinking riddims like Release The Pressure and Afro-Left going down a storm with a crowd who obviously came to re-live the 90s this bank holiday. But it was the Rhythm and Stealth numbers that really brought the night to a climax; Afrika Shox is a song that should only be played through stadium sized speakers and the two-note bassline that makes up the equestrian watersport come nostalgic breakbeat anthem Phat Planet was enough to grant at least a couple of stars from the sneering critics. Extremely satisfying and fitting with the 1990s revival, a roster that blended the acts mentioned in this review would be enough to make a near-perfect festival line-up. As with searching for beats online, if you don’t like the blog then you can close the tab, but there is gold to be found if you seek it out. I am eager to see what they can pull next year after learning from this. What I learnt is that everyone should go out and dance more. That’s basically all that matters.