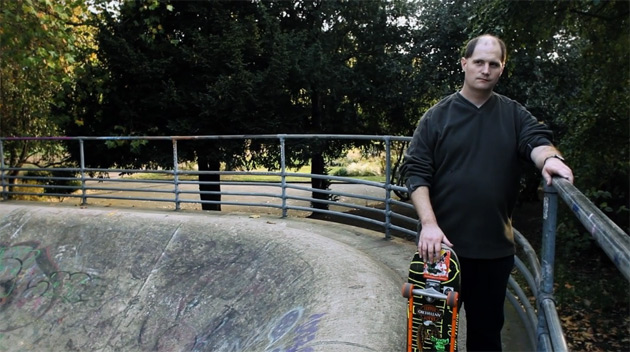 London skateboarders may not know of Graham John Baker by name but there’s a good chance that they would have seen him at every skateboard event that has ever been promoted in London. Graham also knows his skateparks and if it’s dry out there, you know he will be heading out to skate somewhere to jam with the locals and share knowledge of what wheels, trucks and decks people are riding.

Graham has had a long term problem with Asperger’s syndrome, a condition that that is characterized by significant difficulties in social interaction. This has never deterred Graham from getting on his deck and meeting other skaters every week so what a pleasure it was today to find that Will Robson-Scott has filmed him in London at his favourite skate shop Slam City, and traced back some of his first ever memories, skating at St.Albans over 25 years back and being in the crowd of Northampton’s most legendary historic events in the 1980’s.

Watch this video feature today and take in Graham’s life and wise words. If you see him out there on your travels, say hello, as you will not find a nicer skateboarder to chat to out there.