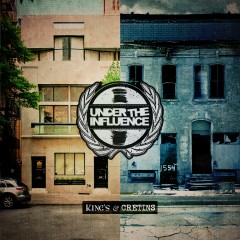 UNDER THE INFLUENCE
“Kings & Cretins”
[Self-released]

Think “political”, “anthem” and “underground”, Under The Influence are that with an additional fighting spirit and a sound completely relevant to 2012.

Taking influence from the mighty Enter Shikari and The King Blues with efforts from producer Romesh Dodangoda (Lostprophets, Funeral For A Friend) this seven track mini album is an utter underdog that’s ready to impress.

A raw street-style atmosphere from five fresh faces that are evidently not short of talent, 4th track ‘S.O.P.A’ unleashes a unique blend of a strong rhythm coupled with delicate piano keys for the outro. The recognisable teen-angst and rebellion gives ‘Kings & Cretins’ an edge. Under The Influence’s sound is big and they are fully charged with enough power to make anyone stop and not only hear, but listen and take note of exactly what they’re proposing.

Experimental, metal-meets-rap, gang vocals and electronic samples with synths gives the five piece a confident streak. ‘Vs The World’ is exciting and full of guts. Title track ‘Kings & Cretins’ is stomping and crashes through the underground ready to take over what and who may be above them.

Closing the door with final track ‘Someone For A Day (No One For A Life Time)’ takes elements of Architects and Bring Me The Horizon in the bridge, where melody that screams pain and a feeling of desperate loss through slowed down instrumentation. The end result? A seemingly underrated band with huge amounts of potential.

It’s impressive. An album to be expected from experimental veterans rather than a new bunch who’ve hardly even got a place on the map. If there is any justice they’re going to get a seal of approval sooner rather than later.