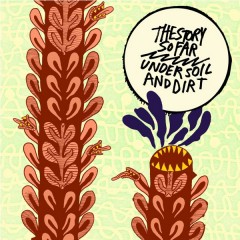 The Story So Far
‘Under Soil And Dirt’
[Pure Noise]

The California bred outfit The Story So Far, play homage to their pure punk rock roots with their debut full length release of ‘Under Soil And Dirt’.

The Story So Far really does remind of the early Four Year Strong and Set Your Goals era. Taking the raw sound of a band straight out of high school and rehearsing in their parents garage, ‘Under Soil And Dirt’ is the epitome of the American punk vibe. While attacking the genre with nail biting, teeth grinding and frankly pretty awesome guitars. There’s a ferocious thirst for destruction and an intense affection in songs ‘Roam’ and ‘Four Years’.

What does come up fighting fit is ‘High Regard’ which advocates a soaring melody that is without a doubt catchy. The quintet must have vision playing this live in front of a herd of troubled hardcore kids’ fist pumping along. ‘Daughters’ will ensure everyone gives this underrated band a head turning reaction. It could be said that many bands in their genre are dumping various random break downs and heartless arrangements, but with the Story So Far it is crystal clear they put in some serious thought as to who they are.

‘Mt. Diablo’ is super eager to break the punk mold, it certainly does depict a poppier aura with contagious hooks and guitar picking that come straight out of summer, showing the underground scene how it’s done. Frontman Parker Cannon projects a primitive tone with a rebel edge that suggests the likes of ‘Rally Cap’ could play the role of a theme tune in a riot.

The 10 tracks on the album takes anyone listening, to the youthful days spent on the beach, using music to express and reveal all their youthful rollercoaster emotions. It’s not brain surgery to write lyrics that capture those early days but Parker and co are not just a bunch of guys in a band, they’re a talented force to be reckoned with.

The Story So Far’s release definitely fascinates and it’s certainly intriguing to see what they will come up with next. They have the potential to be a favourite on the pop-punk/rock menu rivaling even the big dogs in the game.